If there’s anything more iconically Cincinnati than our chili, you’d be hard pressed to find it. Spaghetti, topped with a thin, sweet-spiced meat sauce and a pile of bright orange cheese: locals generally love it, and everyone else is just a little confused. Where did it come from? Why do Cincinnatians love it so much? Is it even chili?

To really understand Cincinnati chili, you need to take a look at its origins. Cincinnati chili is not a descendent of Texas-style chili, but instead of a Greek dish called pastitso, which is layered pasta, cheese and meat sauce flavored with cinnamon, allspice and clove. It is also closely related to saltsa kima, a tomato-based sauce similar in style to an Italian bolognese, but with the sweet Greek spice profile. In the 1920s, immigrants opening restaurants were looking to adapt their own, familiar foods. Macedonian immigrant Tom Kiradjieff began serving this sort of "chili" on top of hot dogs at his restaurant, Empress (named for the burlesque theater next door to his original hot dog stand). The Kiradjieffs also established the "ways" to simplify ordering, which have been expanded upon over the years. For the record:

The thing that gets most people who are unfamiliar with the cheese-topped, strangely thin phenomenon: Cincinnati chili is sweet. While commercial recipes for Cincinnati chili are generally a secret, a quick perusal of favorite home recipes reveals that it doesn’t really have sugar in it. Instead, the sweetness is based on the spice profile which, at least in the U.S., is associated more with baked goods than with savory dishes. With Cincinnati being right on the edge of the South, a region that has a preference for sweeter dishes, the appeal of the sweetness is natural (and anecdotally, Southerners seem to adapt more readily to Cincinnati chili than those from elsewhere in the U.S.).
Cincinnati chili was made famous by the Lambrinides brothers, the creators of Skyline Chili in Price Hill in 1949, which has become the iconic version of the dish. There are now more than 100 locations of Skyline across the Cincinnati area, and as far away as Florida. Gold Star, the other large chain with 85 locations, has locations in the Cincinnati area and a branch of the Daoud family, which owns Gold Star, sells Cincinnati-style chili in the Middle East under the name Chili House. Other major local chili parlors include James Beard-award winning Camp Washington Chili, Blue Ash Chili, Dixie Chili in Newport, Ky., and Price Hill Chili, among many others.

Ask any Cincinnatian what their favorite is, and it’s not as simple as picking between Gold Star, Skyline, or a local parlor. On Twitter, I asked the relatively simple question….

Ok friends: favorite #cincinnati chili parlor? How do you order it? @MoEgger1530 @mike_moroski @RandiRicoWLWT and others, chime in!

And boy, did I get answers.

One 3-way:
- Perform the “west side flop” from the small 3way plate to the larger serving plate below.
- Lots of hot sauce.

One Chilito:
- Cheese and Chili.
- No hot sauce.

Skyline: Side of chz as appetizer, 3-way, chz fries.

PRC/PHC are my fave, but don’t do chili. @Skyline_Chili is my fave chili.

I'd say the chili at Zip's, but I also love anything at Zip's so it's probably not a fair comparison.

(We will give my editor a break, as she’s not from here. We love her anyway.)

Ummm, Oakley Square Skyline, or the old Fairfax Skyline. But fave chili is from Gold Star. Four way with onions.

At 3:15 in the morning from the Clifton location. 1 extreme 3 way, 3 cheese coneys without onion, 1 chili cheese fry, 2 chili cheese burritos with sour cream and a Greek salad. Then I forget it in my Uber and make ramen.

You’ll see that there’s no one right way to order Cincinnati chili, though a few common themes emerge:

Not many people outside of Cincinnati get it. And that’s OK.
WVXU’s own Bill Rinehart put it best (though he's not from here, either):

What is your favorite way to eat Cincinnati Chili? Tweet me at @winemedineme and let me know, and stay tuned for future profiles of Cincinnati food favorites.

This article was first published October 17, 2018. 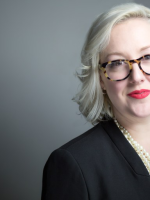