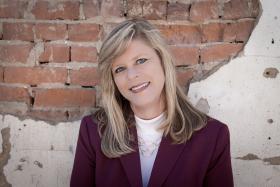 Karen Kasler is a lifelong Ohioan. She grew up in Lancaster, attended Otterbein College in Westerville, and found her first professional break at WCBE-FM, Columbus. Karen was selected as a Fellow in the Kiplinger Program for Mid-Career Journalists at The Ohio State University in 1994. After earning her Master's Degree in that program, she worked at WBNS-TV in Columbus and then moved north to become the afternoon drive anchor/assignment editor for WTAM-AM, Cleveland. Karen followed the demolition and rebuilding of Cleveland Browns Stadium, produced award-winning series on identity theft and the Y2K panic, covered the Republican National Convention in 2000 and the blackout of 2003, and reported annually from the Cleveland National Air Show each year, often going upside down in an aerobatic plane to do it. In 1999, she was a media witness to the execution of Wilford Berry, at the time the first man put to death since Ohio re-instated capital punishment. Karen frequently reported for ABC Radio News, and also co-produced an award-winning nationally-distributed documentary on the one-year anniversary of September 11, 2001, which featured her interview with Homeland Security Secretary Tom Ridge from the West Wing of the White House.

Since returning to Columbus, she's covered major elections and the controversies surrounding them. Each year she anchors the Bureau's live coverage of the governor's State of the State. She was a moderator for US Senate debates in 2012 and 2010, participated in several debates in 2010, and has led debates over statewide issues. She's produced features for NPR and "Marketplace", and has been interviewed by NPR, the BBC, NBC and several local and regional stations around the country. She's a regular panelist on WCPN/ideastream's "The Sound of Ideas", a frequent guest on WOSU-TV’s “Columbus on the Record” and has appeared on WBNS-TV's "Face the State".

She's been honored by the Association of Capitol Editors and Reporters, the Cleveland Press Club/Society of Professional Journalists, the Ohio Educational Telecommunications Commission, and holds a National Headliner Award. She's won several awards from the Ohio AP, and is a four-time winner of the AP's Best Broadcast Writing award. She's a three-time Emmy nominee for "The State of Ohio". She's a past president of the Ohio Associated Press, and currently on the Board of Directors for the Central Ohio Society of Professional Journalists. Karen is also a former adjunct professor at Capital University in Columbus.

Karen, her husband and their son Jack live on Columbus' northeast side.

DeWine: Masks Should Be Worn And Shouldn't Be Partisan

Gov. Mike DeWine changed his initial mask mandate as a condition of businesses reopening, instead requiring masks for employees but not for customers. But while mask wearing has become something of a partisan symbol, DeWine said it shouldn’t be.

More than three quarters of confirmed COVID-19 deaths in Ohio have come from nursing homes. This week’s total is a 30% increase from a week ago.

Ohio State Fair Cancelled For The First Time In 75 Years

For the first time since World War II, the Ohio State Fair won’t go on as scheduled. The fair was set to start on July 29.

DeWine Says He Has Options After Budget Cuts, But Tax Hike Isn't Among Them

With a state budget deficit of three quarters of a billion dollars and just two months left in the fiscal year, Gov. Mike DeWine ordered huge cuts to schools, Medicaid and other areas. He says he’s considering other options going forward, but he has ruled out one possibility.

There have been at least 674 deaths from coronavirus at nursing homes in Ohio, which is 43% of the state’s confirmed COVID-19 deaths. After saying for weeks that nursing home residents who have symptoms are tested but limitations prevented mass testing, there’s a plan for more tests in long-term care facilities.

Annie Glenn, the wife of the late astronaut, Senator and presidential candidate John Glenn, has died of complications from COVID-19.

Ohio’s K-12 schools are winding down their remote classes to end this unusual year. And Gov. Mike DeWine says he and school leaders are making plans for returning to in-person classes after summer break.

Gov. Mike DeWine is warning bars and restaurants that those who don't follow safety guidelines could risk losing their liquor licenses and even face possible criminal charges. The announcement comes after reports and photos circulated of crowded patios on the first night outdoor dining was allowed since March 15.

It was a big weekend for the bars and restaurants that reopened outdoor patios. Many chose not to open, and most of those that did observed social distancing. But pictures of some that didn’t were widely circulated on social media.

Child Care Facilities Can Reopen Later This Month, Along With Many Other Businesses

Child care facilities can reopen under strict new rules on May 31, a move that's considered essential for many workers to return to their jobs. And many other businesses got the go-ahead to reopen as well.

A group of 35 independent gyms and fitness centers is suing the state, saying they could reopen for business safely but they’re not being allowed to.

The Ohio Supreme Court has let stand the law that allows the state to take over failing school districts, starting with the Youngstown City Schools in 2015.

The slowdown of the economy because of COVID-19 has had a huge impact on traffic and transit. And even though the state’s gas tax that funds road construction went up by 10.5 cents a gallon last July, the Ohio Department of Transportation is bracing for a big hit.

System To Pay Ohio's 1099, Self-Employed And Other Workers Finally Online

This morning brought long-awaited news for the self-employed, independent contractors and 1099 workers in Ohio – the system to pay them jobless benefits is live.

After saying last week that an announcement on reopening child care centers would be coming Monday, Gov. Mike DeWine said today he wasn't ready to bring forward a date or plans on that quite yet.

Only Half Of 1.1 Million Jobless Claims Have Been Paid - Why?

The Ohio Department Job and Family Services has paid more than $2 billion in unemployment claims to nearly 560,000 Ohioans since mid-March. But that’s only half of the 1.1 million claims that have been filed.

Ohio’s more than 600 public school districts are taking $300 million in cuts as the state deals with a deficit of more than three quarters of a billion dollars. While that’s a reduction of just under 4% to K-12 education overall, school leaders say it’s a tough hit at the local level.

Gov. Mike DeWine confirmed again that he would veto a bill that passed the House yesterday that seeks to limit the power he and Ohio Department of Health Director Dr. Amy Acton have to issue new public health orders.

One Area Of State Budget Was Up, But There's No Celebration

The state budget is a sea of red, as income and sales tax collections are less than half of what was predicted for this month. There is one specific area of the budget that is showing big increases, but it’s not what state officials want to see.