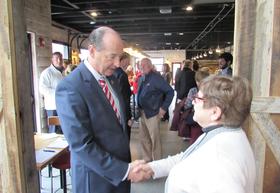 While some may still be catching their breath after the midterm election, candidates in the 2019 race for Kentucky governor are off and running. Democrat Rocky Adkins was at a union hall in Owensboro on the morning of Nov. 20, followed by an afternoon stop at a restaurant in Bowling Green.

Representative Rocky Adkins said his 31 years in the state legislature, including serving as minority floor leader, and his common sense approach to finding  solutions make him a strong candidate in what’s looking like a competitive Democratic primary in May.

“I think I’m the one Democrat that can win in November. My record proves that. It’s been a record that is very moderate, middle of the road,” Adkins said during a campaign stop at Steamers Seafood restaurant in Bowling Green. “So I do believe that I’m the Democrat that can bring back those conservative Democrats we’ve been losing.”

Adkins said he’s been a teacher and will work to make sure current and future teachers have a better pension plan than the controversial one passed by the previous legislature.

“The bill that the Republicans passed, that they took into a side room, 291 pages, the bill, of course, was struck down by Judge Shepherd in circuit court and now it’s in Supreme Court and we’re awaiting a decision,” said Adkins. “I hope that bill is struck down.”

Adkins proudly points to his rural roots in the Eastern Kentucky town of Sandy Hook in Elliott County. He represents House District 99, which also includes Lewis and Rowan Counties.

So far, Democratic Attorney General Andy Beshear has announced he’s running for governor. Another possible candidate for  governor in the May primary is former State Auditor Adam Edelen, who stumped for several Democratic candidates during the midterms and said he’d have an ‘announcement’ in December.

And Republican incumbent Matt Bevin has announced that he’s running for re-election.

Why Kentucky Could Change Its Graduation Requirements, Despite Successes

Kentucky has one of the highest graduation rates in the nation, with nearly 90 percent of seniors receiving their diplomas each year. But according to Commissioner of Education Wayne Lewis, not all of Kentucky's students are graduating prepared. Only 65 percent of 2017 graduates met standards preparing them for college or a career.

Attorney General Andy Beshear has filed a lawsuit against another painkiller manufacturer, saying that the company fueled Kentucky’s drug epidemic through aggressive marketing and fraud.

Kentucky has become one of more than two-dozen states to ban state resources from going towards companies that boycott Israeli products and services. Capitol reporter Ryland Barton says Gov. Matt Bevin issued an executive order freezing out those who support the boycott.