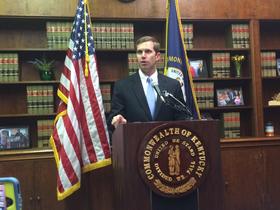 Kentucky’s attorney general is suing another pharmaceutical manufacturer for contributing to the state’s opioid crisis.

"Teva's products were approved for a narrow use, to treat cancer and end of life pain, but for Teva, that was not profitable enough," stated Beshear.

Beshear says Teva marketed its drugs Actiq and Fentora to physicians other than oncologists, and that the drugs were not approved to treat chronic pain.

The lawsuit against Teva is the eighth opioid-related lawsuit Beshear has filed against drug manufacturers and distributors that he says have fueled the state’s abuse of powerful prescription pain relievers.

Beshear has already sued distributors, AmerisourceBergen, Cardinal Health and McKesson Corp.  He has also filed lawsuits against manufacturers Johnson and Johnson, Walgreens, Mallinckrodt and Endo Pharmaceuticals.  The attorney general says those pharmaceutical companies, combined, are responsible for supplying 85% of opioids in Kentucky.

Beshear is asking state lawmakers to create a trust fund for money recovered from the lawsuits.  The funds would be spent on addressing the opioid epidemic  through law enforcement, prevention, and treatment efforts.

Kentuckians are being told to look out for scams being perpetrated by individuals claiming to represent voter registration groups.

The Kentucky Supreme Court heard arguments over the state’s new pension law on Thursday, months after teachers and other government workers descended on Frankfort to protest changes to retirement benefits.