Like the other 11 rookie police officers sworn in Friday night, Damber Subba wore a deep blue uniform, his posture erect, steps precise, face serious. But before the evening was over, he was a half-dozen layers deep in brightly colored scarves and garlands of flowers.

In Bhutanese culture, he explains, it means congratulations and more: "Acknowledging they are doing better than yesterday and empowering them to be better in the future. So it means a lot.”

From bamboo huts to home

Like about 5,000 other people now living in the Akron area, Subba’s family fled from Bhutan, and he grew up in one of seven sprawling refugee camps not far from Nepal’s border with India. The roofs of the bamboo huts leaked, fires tore through the camps periodically, healthcare was hit-and-miss.

But what bothered him the most, Subba says, was a sense that he didn’t belong.

“I didn’t have any identity. I was a citizen of nowhere.”

That changed when his family got word from the organization charged with resettling the world’s refugees: (International Organization for Migration) that they were heading to America. Subba says it was a dream.

His family was among the first Bhutanese refugees to move to Akron in 2008. He remembers sitting in their apartment – looking up at a ceiling that didn’t leak, surrounded by walls that kept out the wind – happy.

Like most of the new arrivals, he got a job at a manufacturing plant. The economy crashed and he was laid off. He trained and began work as an interpreter, eventually becoming one of a handful of certified Nepali-language medical interpreters in the country. Then came citizenship in 2014, a day he says is second in joy only to the birth of his daughter.

But he kept thinking about the law, and about the gaps between his native community and his adopted community. He says it’s a problem of language, culture and experiences.

“People are still not comfortable to call 911 when they are victimized, when something happens. First of all they don’t speak English. Second thing, what are they going to say when police comes? And third thing, police over back in Nepal, they’re treated way different than over there, so people have bad experience; they don’t want to interact with the police." 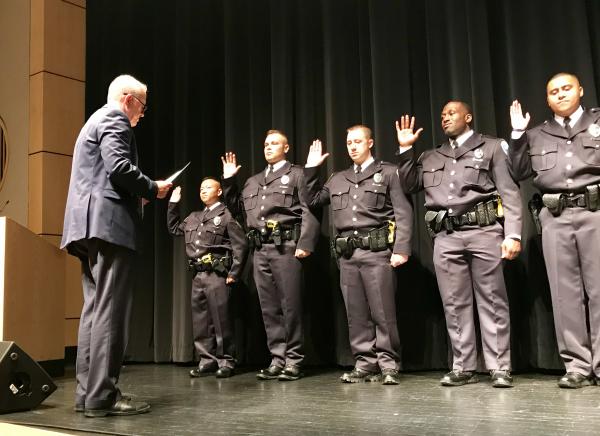 Subba saw himself as a cultural bridge. He wanted to be a police officer. The problem, he thought, is that he barely tops five foot. He had an image of American’s police force as big, beefy guys.

“Honestly, I’ve never seen police short like me before.”

Akron police recruiters told him height didn’t matter as long as he could pass the physical and other tests for recruits. He could and did, completing the basic police training academy and then Akron’s own.

Sgt. Daniel Engelhart, his training officer, was among those celebrating Friday night. He says Subba handled everything that could be thrown at him during training – with a smile.

“He started with the idea that others would follow if he proved that it could be done. He’s going to be a tremendous asset with his bilingual capacity, his empathy that he demonstrated, having a completely different background.” 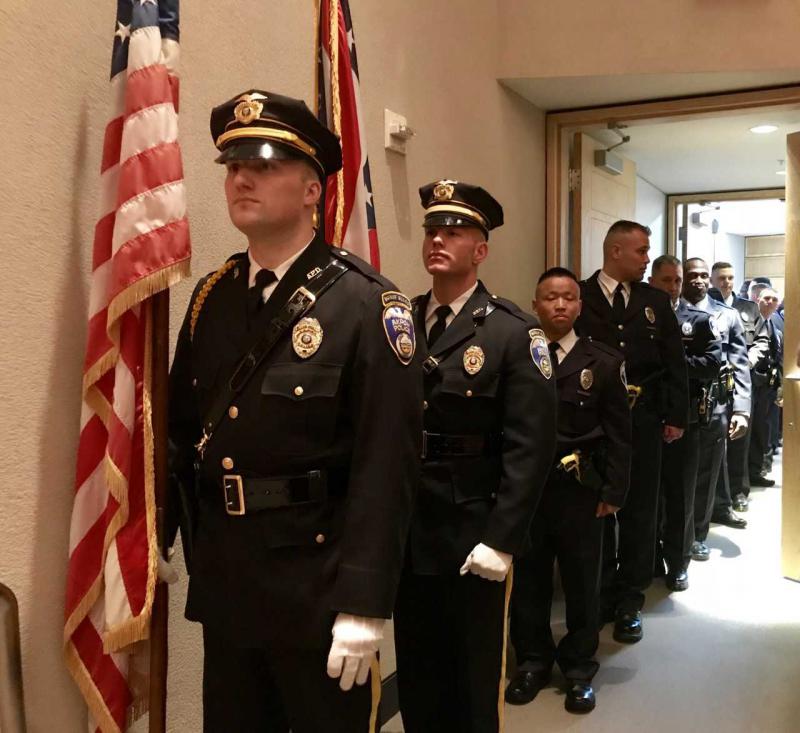 The week before the swearing in, Mayor Dan Horrigan and Charles Brown, the deputy mayor who heads Akron’s safety forces, visited all of the Akron Public Schools senior classes.

Brown says the story of Damber Subba was already well-known when they got to North High School -- about a half-dozen Nepali students that day asked about joining the force.

"Clearly our goal is to make sure that our safety forces, our workforce, represents the citizens that we serve in a very special way. And it just makes me feel really good to see that young man, and the folks that he is modeling for, come up and want to do this job. It’s a great thing, a great thing.”

Mayor Horrigan says he hopes it’s a great thing that happens repeatedly in Akron as the city’s safety forces grow to reflect the city they serve.