Bevin In Re-Election Mode During State Of The Commonwealth Address 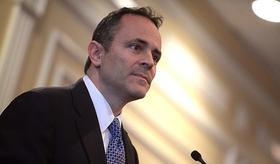 Gov. Matt Bevin spent much of his fourth State of the Commonwealth Address praising the Republican-led legislature for passing measures like so-called “right-to-work” legislation, anti-abortion policies and attempting to make changes to state worker pension benefits.

The appreciative tone comes a little more than a month after Bevin chided the General Assembly — which has more than three-fifths majority in each chamber — for quickly ending a specially-called legislative session without passing an overhaul of the pension systems.

But Bevin is in re-election mode now and is eager to tout his administration’s accomplishments amid low approval ratings and a series of controversial comments ranging from a critique of snow days to a claim that teacher protests led to child to abuse.

Bevin will also need legislative support to advance his signature proposal — an overhaul of Kentucky’s pension systems. Lawmakers obliged last year despite massive protests from teachers and other state workers, but the state Supreme Court struck down the measure saying lawmakers rushed it.

“We must do more,” Bevin said in the 45-minute speech. “There is still need for structural change on a going forward basis, has to, or the money will not be there.”

Bevin has signed off on massive infusions of cash into the pension systems, which now account for about 14 percent of all state spending.

Praising lawmakers for passing “right-to-work” legislation that bans companies from requiring workers to pay union dues, Bevin said the state has accumulated $17.7 billion in investments and 49,870 new jobs since the beginning of his administration, though those numbers reflect planned investments and jobs.

Bevin praised lawmakers for passing changes to the state’s tax code, even though he vetoed that legislation last year and was ultimately overridden. And he called for lawmakers to make more changes.

“I thought it was an effective job of perhaps dialing back just a little bit and reflecting on the fact that we’ve done a lot of really good work,” Osborne said.

Signaling what might be a major debate during this year’s gubernatorial race, Bevin criticized Democratic Attorney General Andy Beshear for not defending recent anti-abortion laws that have passed out of the legislature and challenged in federal courts.

“We in this administration — on your behalf as the people who have legally passed these into law — are defending them,” Bevin said.

Beshear, who is running for governor in a four-way Democratic primary, recently sent a letter to legislative leaders discouraging them from passing a proposal to ban abortions once a fetal heartbeat can be detected because it is unconstitutional.

After Bevin’s speech, Beshear defended his stance on the issue.

“The constitution provides a choice that I believe is between a woman and her doctor for at least the two trimesters of pregnancy and I’m going to enforce that constitutional right,” Beshear said.

After the speech, Adkins wouldn’t weigh in on specific abortion bills, but shied away from criticizing Beshear’s stance.

“I think that we have a law in America that basically is Roe v. Wade and I think each one of those pieces of legislation have to be looked at,” Adkins said.

Adkins has voted in favor of anti-abortion measures in recent years, including the ban on the procedure after the 19th week in pregnancy and an ultrasound abortion requirement, which has been struck down by a federal court.

There are four Republicans running for governor this year — Bevin, state Rep. Robert Goforth of East Bernstadt, Ike Lawrence of Lexington and William Woods of Corinth.

And there are four Democrats, too — Beshear, Adkins, former state Auditor Adam Edelen and Geoff Young of Lexington.

This story has been corrected. It previously stated Republicans control more than two-thirds of the seats in each legislative chamber and has been changed to "more than three-fifths."

Kentucky’s infrastructure is falling apart faster than the pace of investment, based on the latest grade from the American Society for Civil Engineers.

If the commonwealth were graded on a curve, it would still be doing better than the country as a whole, which received a “D+” on its last report card; whereas Kentucky squeaked past this year with a “C-“.

Gov. Matt Bevin met with members of the Kentucky Poor People's campaign after the group rallied outside his office for nearly an hour on Tuesday.

Incumbent Kentucky Governor Matt Bevin will be challenged by three fellow Republicans in this year's governor's race. Four Democrats will compete in the May 21 primary to be their party's nominee this November.