Congressman Andy Barr Heads Back To Washington For Fourth Term 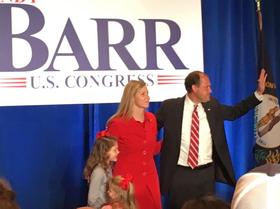 “We are a people, who rose from the rugged pioneer spirit which built this country. And there is no reason why Kentuckians can't lead a political and spiritual renewal to go along with our nation’s economic revival,” Barr said.

Barr thanked McGrath for stiff competition, saying it made him a better leader and better Congressman. For her part, McGrath promised to remain an active voice in Kentucky.

She built her campaign as an anti-establishment candidate and gained the reputation of running a positive campaign. McGrath and her supporters criticized GOP interests for running attacks ads.

“Unfortunately negative campaigning is still a factor. And it’s unfortunate but I think it has a lot to do with the types of attacks that were run and I don’t know. We’ll take a step back and take a look at it. But I don’t really know," she said.

In an extraordinarily combative news conference Wednesday after voters delivered him a rebuke by giving control of the House to Democrats, President Trump went after Republicans, Democrats and the media.

He mocked Republican candidates who distanced themselves from him, chided a reporter for asking a "racist question" and walked away from the lectern at one point, as an aide tried to wrest a microphone out of a reporter's hands.

Kim Davis, the Kentucky clerk whose refusal to sign marriage certificates for same-sex couples grabbed national headlines in 2015, has lost her bid for re-election to the Rowan County clerkship. The Republican lost to Democrat Elwood Caudill Jr., 54 percent to 46 percent.

Get the latest on Ohio's ballot measure and races for governor, Senate and House.