Future in Question for Confederate Marker at WKU 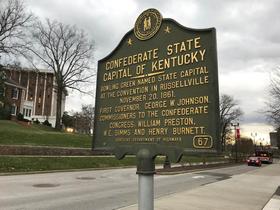 The Student Government Association at Western Kentucky University has voted in favor of relocating a historical marker on campus.

The marker identifies Bowling Green as the Confederate Capital of Kentucky during the Civil War.  The marker was erected in 1952 during the civil rights era and stands in front of the Kentucky Museum.  SGA member Symone Whalin is an African-American student from Hardin County.

“I just feel like people should understand there is a time and setting for history to be remembered and I don’t think that every time I walk to class, I should be reminded that people who looked like me were not allowed to be here," Whalin told WKU Public Radio.

A resolution approved by the SGA calls for the marker to be moved inside the Kentucky Museum and become part of a historical display.

"We appreciate the discourse this discussion has created and we’re waiting to see what the next steps are," said university spokesman Bob Skipper.

The markers are administered by the Kentucky Historical Society and the Kentucky Department of Highways.  While the marker is on WKU property, it doesn’t technically belong to the university.  When it was installed on what is now College Heights Boulevard, the road was U.S. 68.

A House Committee has advanced a controversial bill that drew protests from hundreds of Kentucky educators in Frankfort Thursday.

The bill — House Bill 525 — would change the membership of the board of trustees that manages the teacher pension plan. On Wednesday, a teacher advocacy group called on educators to call in sick Thursday and arrive at the Capitol en masse to protest the bill. Hundreds showed up, flooding the bill’s committee hearing with the line wrapping across the lawn.

A bill to require all public schools in Kentucky to display the national motto "In God We Trust" has passed its first hurdle in the legislature. The House Education Committee approved the bill this week in a split vote.

Wright State University’s faculty union has launched a GoFundMe page to raise money. Organizers say any donations raised during the fundraising campaign will reimburse union members for pay they lost during Wright State’s recent strike. The so-called AAUP-WSU Strike Fund has a goal of raising $500,000.