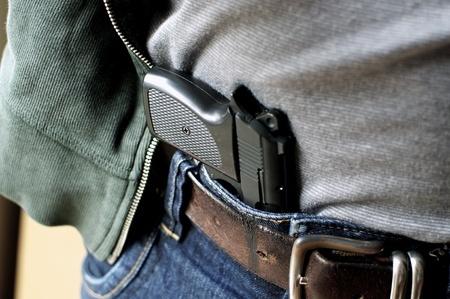 Governor Matt Bevin says he is prepared to sign Senate Bill 150 into law.  The legislation, easily adopted in each house of the legislature, allows Kentuckians 21 and older to carry concealed deadly weapons without a license in areas currently allowed for permit holders.

Bevin says it’s not surprising some Kentuckians disagree with the legislation.  He called that the, quote, “nature of politics”, adding “the vast majority of people want to see this and they will get it.”  The bill was delivered to his desk Monday.

Kentuckians wouldn’t need a permit to carry concealed firearms under a bill that is nearing final passage in the state legislature. It now only has to pass out of the state House of Representatives and be signed by Gov. Matt Bevin.

Currently, concealed-carry holders have to take an eight-hour training course and have a background check to receive a permit.

Rep. Charles Booker, a Democrat from Louisville, said he was worried that the measure would lead to more gun violence.

The state has joined two briefings filed with the U.S. Supreme Court on cases dealing with gun ownership and regulations. Ohio Attorney General Dave Yost says one of the legal fights is about protecting the country from setting a dangerous precedent related to constitutional rights.

A gun owners’ group is taking aim at a self-defense law passed in the lame duck session last year – saying it could make felons out of half a million Ohioans who own certain weapons.