Kentucky Derby 144: The Wettest On Record 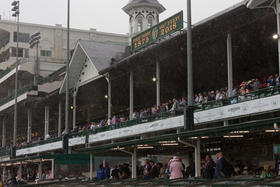 Saturday’s 144th Kentucky Derby made history as the wettest ever, beating a hundred-year-old record set in 1918.

But the rains didn’t dissuade the crowds, who donned ponchos and sucked down mint juleps in spite of the weather. More than 157,000 revelers showed up to watch the races.

The track favorite, Justify, took home first place and overcame the so-called Apollo Curse. The colt didn’t race as a two-year-old, and it’s been 136 years since a horse has won the race without that experience. 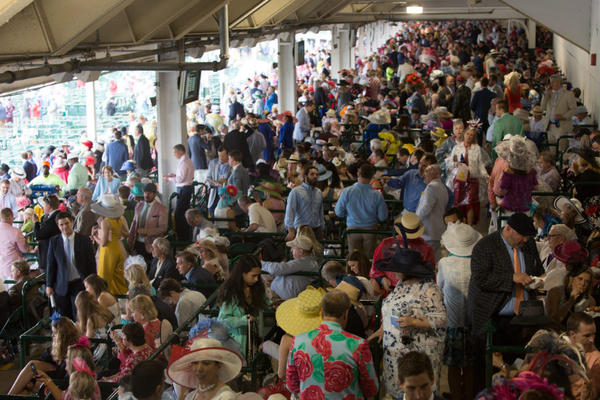 Promises Fulfilled set the pace out of the gate, but Justify seized first with a half-mile left and galloped through the mud to win by 2 and a half lengths.

“That last one-hundred yards, I knew that last 1/8th he was going to win and I was just in awe of the performance,” he said. “I mean that’s the best Kentucky Derby winning performance I’ve brought up here.”

Good Magic finished in second place and Audible in third.

The last time it rained anywhere near this hard during the Derby was 100 years ago when 2.31 inches of rain fell, according to the National Weather Service. 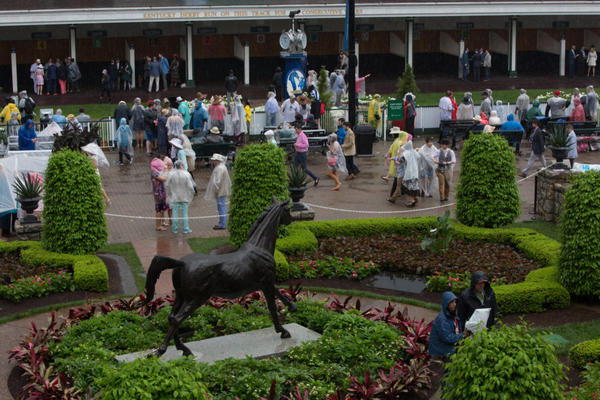 By 5 p.m., the Nation Weather Service declared it was the wettest Kentucky Derby on record. At least 2.83 inches fell over 14 hours as of Saturday night.

Anthony Coleman, 18, was selling ponchos on a street corner to raise money for his lawn mowing-business.

“It’s been good. We sold out of all our ponchos. I’m just waiting on my business partner. He’s going to buy some more so we can sell them,” Coleman said. “But you know this is a great time to have them because it’s raining pretty hard right now.” 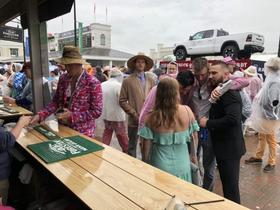 But the wet weather didn’t stop people from looking dapper.  Mike Lacey managed to stay dry in a gold and mint three-piece suit.

“This year I got to pick the color and the outfit, which will probably never happen again.  We try to do loud and bright,” he said.

But it was the brave souls in the infield who faced the worst of the weather. With few places to take shelter, people found creative ways to stay dry.

Some brought camping chairs with canopies, others brought tarps, and others still, wore trash bags.

But even the persistent rain, couldn’t dampen the spirits of the revelers in the in-field. Wes Crane summed up the mood:

“You know what? I’d rather have a bad day at the Derby than a good day anywhere else.”

Editor's note: This story first appeared in May 2018. We're republishing it here with updates for the 2019 Derby on Saturday, May 4.

If you're not a fan of the mint julep—an icy-minty-bourbon concoction popular around the Kentucky Derby—it's likely for good reason: you just haven't had a good one.

It’s a cool spring morning just about dawn on the backside of Churchill Downs, eight days before the Derby. Exercise riders on gleaming racehorses trot past the barns and onto the track for a workout. Some horses have already finished and are being hosed down…they’re so warm, steam is rising off their backs when the water hits.