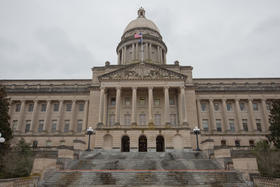 Kentucky’s public schools would be required to post the national motto of “In God We Trust” inside their buildings under legislation that’s been pre-filed for next legislative session.  The bill is being sponsored by State Representative Brandon Reed, a LaRue County evangelist.

“In a time of rampant drug use, increasing school violence, and mounting cases of suicide among our youth, we need God in our schools now more than ever,” stated Reed.

Reed’s bill would require elementary, middle, and high schools to display the “In God We Trust” motto in a prominent location such as a school entry way, cafeteria, or common area.  The Hodgenville Republican says the words are a vital part of American culture and are already featured on money, license plates, and other platforms.

Laws requiring the display of "In God We Trust" in schools are already on the books in other states, including Tennessee.  If approved by the 2019 Kentucky General Assembly, local school boards would be required to implement the measure starting in the 2019-2020 academic year.

An education board in Kentucky has voted to eliminate a requirement that public school teachers earn a Master’s degree to continue in the profession.

The Education Professional Standards Board voted on Monday to approve a waiver that eliminates the mandate for teachers to move to Rank II.  The panel said the move will provide school districts with greater flexibility in recruiting and retaining educators.

Warren County Schools Superintendent Rob Clayton says when he initially learned of the decision, he was worried the state was lowering standards for teachers.