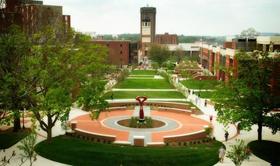 Employees of Kentucky’s public colleges and universities will continue to receive tuition assistance in the upcoming fall semester, despite the end of a program that allowed them take some classes for free at other schools.

The General Assembly this year eliminated a statewide mandatory tuition waiver requirement that allowed full-time employees of post-secondary institutions to take up to six credit hours per semester at no cost.  House Bill 592 retained those benefits only for employees of state and locally operated secondary area technology centers.

"When the law was originally drafted in 1997, state support made up about two-thirds of an institution's budget, and now that's flipped.  It's about one-third state support and two-thirds institutional funds, so we're operating in quite a different environment than we did in the past."

Powell said institutions delivering the education were not receiving benefits from it as if they were educating their own employees.  He told WKU Public Radio that the tuition waiver cost colleges and universities more than $23 million in the 2017 academic year.

The tuition waiver is being extended through the upcoming fall semester at Western Kentucky University and at the state's other public colleges and universities.  In the meantime, the schools are in discussions with each other about possible partnership agreements in the future.

"Prior to Spring 2019, institutions will work together to develop a longer-term agreement and policy beneficial to the higher education community," said WKU Human Resources Director Tony Glisson in an email last week to faculty and staff.

The General Assembly’s action does not affect tuition assistance for university employees and their family members at their respective schools.

Enrolled, enlisted and employed. Cincinnati Public Schools Superintendent Laura Mitchell says the district is taking a focus on the three Es. During the annual State of the Schools address, Mitchell laid out a new partnership with local organizations, including the Cincinnati USA Regional Chamber, meant to help prepare students for graduation and beyond.

The first day of class for many local college students begins in late August. While students and parents are buying books and dorm supplies, there's one thing some families don't consider when preparing for college: a conversation about sexual assault. With more than 4,000 undergraduates enrolled at Xavier University and more than 30,000 at the University of Cincinnati, what are colleges doing to help educate students about sexual violence?