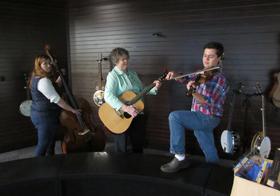 After years of planning, the new Bluegrass Music Hall of Fame and Museum in Owensboro is inviting the public to celebrate the grand opening Saturday, Oct. 20 with a one-day music festival on the outdoor stage. The museum has moved from smaller quarters a few blocks away to the new waterfront home of bluegrass.

This is what a typical day is bound to sound like at Owensboro’s new Bluegrass Music Hall of Fame and Museum. Carly Smith is the museum’s marketing director.

“It’s our Pickin’ Parlor. A lot of our guests happen to be pickers themselves. So we have some really nice instruments, above student level on the wall for them to grab and play.”‘ “So what’s here, available?”  “We have fiddles in all four sizes, quarter-size, half-size, three-quarter size, full size, a banjo, dobro, guitar, mandolin, couple more guitar and banjos and a bass.”  “So visitors can just come and sit down, somebody might be here?” “Absolutely, that’s the whole idea. We want to encourage people to make the music.”

On this particular day in the Pickin’ Parlor it’s the museum’s technology contractor Mike Hobson on mandolin, volunteer Sally Dickens on guitar, employee Kristy Westerfield on bass, and volunteer Matthew Graviss  on fiddle. They’re taking a music break during preparations for the opening of the $15 million building.

This the first time Graviss has been in the new bluegrass center.

“I love the fiddle exhibits they have here. I think it’s really nice. I definitely love the Hall of Fame, too," said Graviss. "It’s just awesome. It’s breathtaking.”

Smith says the story of bluegrass is enriched by films from Appalshop, the nonprofit cultural arts organization in Eastern Kentucky.

“Appalshop, we worked with them and some of their filmmakers. It’s been a long partnership over the last year to pull them together, but their films are great," said Smith. "So that’s just an added component to when you come to visit. It’s not just going to be static images and artifacts. There will be lots of films to see, too.”

For the Oct. 20 grand opening public event, the gates open at noon with a free outdoor concert beginning at 1 p.m. with High Fidelity, followed by Front Country at 3 p.m., Town Mountain at 5 p.m., and  Yonder Mountain String Band at 7 p.m. The outdoor festival will include food vendors.

The Bluegrass Music Hall of Fame and Museum will open to the public beginning  Saturday, Oct. 20 with paid admission. The bluegrass museum is at 311 West Second Street in Owensboro.

The city of Cincinnati honored local music legend Katie Laur Wednesday, calling her a pioneer for her role as a woman fronting a bluegrass band, a rarity in the 1970s and '80s.