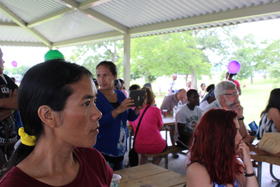 The Trump administration’s decision to lower the cap on refugees admitted into the U.S. is calling into question the future of refugee resettlement in Bowling Green. The administration announced Monday it’s reducing the refugee cap to a record low of 30,000. The International Center of Kentucky was planning to resettle about 400 refugees this year, but now it may not be able to bring in even half of that.

The Bowling Green-based agency is a volunteer group that relies on federal funds to resettle refugees. With less refugees coming to Bowling Green, the International Center will have to cut back on staff and resources.

Albert Mbanfu is the Executive Director of the Center. He said his group resettles refugees through the voluntary agency the U.S. Committee for Refugees and Immigrants, one of the nine voluntary agencies that has a contract with the State Department to conduct refugee resettlement. But the State Department has indicated it may not retain its contracts with all of those volunteer agencies.

“If they are not then probably we will just have to take care of the ones we brought in this year, and that will be the end of refugee resettlement in Bowling Green,” Mbanfu said.

Mbanfu said it’s unclear which agencies will keep their contracts or how many refugees the Bowling Green-based center will be able to resettle. He said the new cap will mean the United States will resettle one refugee for every one thousand people. Mbanfu said that pales in comparison to much smaller countries like Lebanon, which is resettling 173 refugees per one thousand. He said the new cap is equivalent to America turning its back on not only those in dire circumstances abroad, but also on the country’s ideals

“Well I don’t think they really care. I think the administration is just bent on dismantling the program,” Mbanfu said.

The International Center is one of two such agencies in the state. Bowling Green is also home to the first four-year refugee and immigrant high school in Kentucky.

Ohio Immigration Arrests Boom Under Trump, Though Below Obama Highs

The Trump administration has reversed a years-long decline in immigration arrests in Ohio and Michigan, sweeping up people previously considered lower priority for deportation, according to government figures and interviews with attorneys.

More than 100 people are believed to still be detained after immigration raids in Northern Ohio last month that garnered international attention.

Sunday the Bishop of the Diocese of Cleveland Nelson Perez celebrated Mass in Lorain for the needs of immigrant families, and for immigration reform.