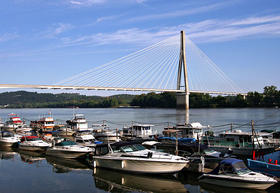 A multi-state commission charged with protecting the Ohio River decided Thursday to postpone a decision to dramatically alter pollution controls.

The eight state body was created before the passage of the Clean Water Act, with a mission to collaboratively protect the river and set limits on industrial pollution through water quality standards. ORSANCO Director Richard Harrison said the new proposal is about balancing where to put the body's limited resources.

"This review was really about determining what is the proper role for ORSANCO going forward," he said. "Is it in pollution control standards? Or is it in other areas such as scientific research."

"The pollution control standards of the commission actually represent a third layer of standards for the Ohio River," Harrison said. "Each member state has criteria and it's actually the member states that implement standards through their permitting program.”

"Really the amount of comment is the reason the committee is taking some more time to deliberate and really make sure we continue our thorough review," he added.

Conservation groups cheered the decision. Robin Blakeman, with the Ohio Valley Environmental Coalition, said the proposal, if passed as is, will diminish the river's water quality. That could affect ecosystems and jeopardize the river, which is a source of drinking water for 5 million people.

"Essentially they backed away from making a decision at this meeting and they say they're going to engage in further dialogue with those of us in the environmental communities," she said. "So, we're very glad for that."

ORSANCO is next scheduled to meet in February in Covington, KY. Harrison said the committee could provide a recommendation at any time, and at this time there are no additional public hearings on the proposal scheduled.

The City of Dayton is suing several manufacturers that made products containing toxic chemicals that have threatened the city’s water supply.

The city says the defendants operated in Dayton at some time and used the chemical perfluorooctane sulfonate or PFOS in the manufacturing of a foam product used to fight fires.

Planned Cincinnati Solar Project Could Be Largest In U.S.

The City of Cincinnati is expected to put out a request for proposals next month in what could be the largest solar array by a city on city property. The 25 mega-watt project would power 25 percent of the city's energy needs.

Greater Cincinnati not only has a vibrant and growing arts, cultural and entertainment scene, it's also an amazing place to discover life in the great outdoors. And the 15th annual Great Outdoor Weekend, September 29 and 30, is the perfect opportunity to explore all our region has to offer.