Protesters in Philadelphia Remain Loyal to Bernie, Skeptical of Hillary 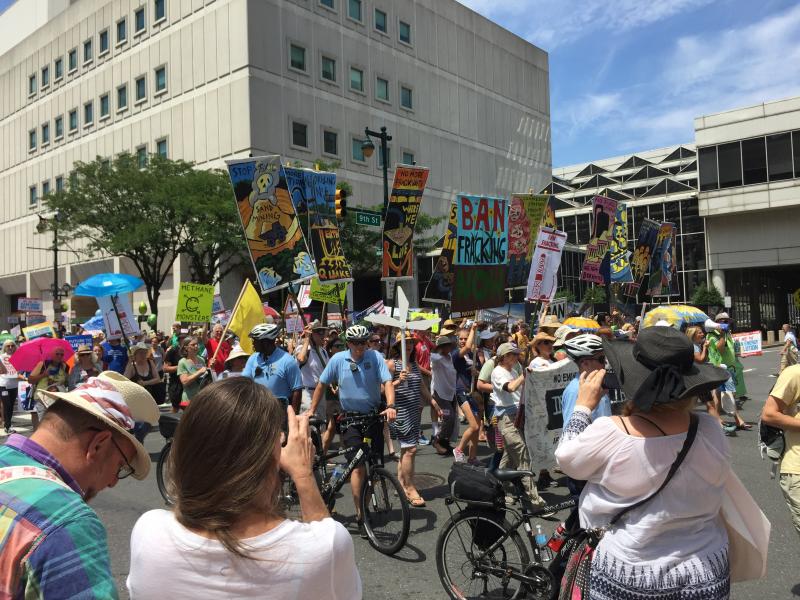 Bernie Sanders is expected to endorse Hillary Clinton tomorrow night, the opening night of the Democratic National Convention. But there are plenty of signs – literally – that his supporters aren’t there yet. WKSU’s M.L. Schultze has more from Philadelphia.

The signs carried by protesters from Philadelphia City Hall to Independence Mall took issue with fracking, war, the privatization of prisons – and Hillary Clinton.

Heidi Clark and Ken Salins made the trip up from the D.C. area to show their support for Bernie Sanders.

“He started something and he’s ignited a passion in people and we don’t want that to end. We’re on the verge of the opportunity to really get rid of corruption, to change the way things work in this country," Clark said. "And it’s an incredible feeling of hope and I want to be part of that.

Added Salins: “We want to send a message that it’s not ending with this election. This movement should carry on to the next several elections and beyond.”

They also made it clear how far Clinton needs to go to win them over, and Clark says Sanders’ endorsement is not enough.

“I’m not where he is right now with respect to Hillary. She’d have to show a real commitment. Sometimes I feel like she teeters on sounding like she endorses what the American people are asking for, but sometimes it seems like a strategy rather than a heartfelt conviction.”

Clark, who’s 52, says for the first time in her adult life, she may not vote for president.

Janis Musselman’s vote may go to a third party, the Green Party’s Jill Stein. And she says she won’t apologize if such votes tip the election Donald Trump’s way.

“Hillary is a very weak candidate. She has a lot of vulnerabilities that Trump will exploit. She thinks Bernie was angry or whatever at the debates. Just wait (to see) what Trump’s going to do. Trump is going to eviscerate her.”

As in Cleveland, police – most on bikes -- accompanied the protesters, which were largely peaceful and are expected to continue through the week.