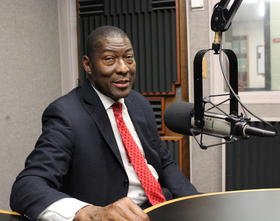 Kentucky has 134,000 open jobs and that number is expected to increase. The state’s Labor Cabinet and Education and Workforce Development Cabinet have been turning to apprenticeships to bridge the gap between skilled jobs and workers.

Education and Workforce Development Secretary Derrick Ramsey said in order to fill those jobs; all hands have to be on deck. He said that means apprenticeship programs for students, encouraging people leaving the military to stay in Kentucky, and giving the incarcerated population a second chance.

“There’s another group out there, the adult education group. Roughly 347,000 people in our Commonwealth do not have a GED or high school equivalent. Well, we’ve got to change that,” Ramsey told WKU Public Radio.

Ramsey said the minimum wage also needs to be increased, and he’s encouraging employers hosting apprenticeships to start at a minimum of $11.25 an hour. The current minimum wage is $7.25 an hour. He’s encouraging students across the commonwealth to participate in apprenticeships. He said the appropriate compensation is different across the state, because cost of living is different.

“On this end of the Commonwealth 15 dollars isn’t a bad number. Well, I was just in Northern Kentucky, 15 dollars, 16 dollars an hour you can barely make it,” Ramsey said.

Secretary Ramsey said finding enough skilled workers over the next 20 to 30 years is going to be a problem. He added there are about 6,000 Kentucky soldiers that transition back into civilian life each year, and he hopes to encourage more of them to stay in the Commonwealth.

Universities throughout Ohio are reporting crime statistics on their campuses as part of the Clery Act – a law that requires colleges that receive federal funding to make known crime statistics for the past three years. But State Auditor Dave Yost says he thinks the process for doing this needs to be improved.

Nearly 100 people gathered at Dayton Boys Prep Academy Tuesday to learn more about the latest efforts to turn around Dayton Public Schools. The district, which received an overall grade of “F” on this year’s state report card, is trying to avoid state takeover next year.

Former ECOT Teachers Get Back To ‘Traditional’ Schooling

This is the second of a two-part story on the aftermath of ECOT's closure. Read part one here.

Beth Day, assistant principal of Washington High School, watches as students change classes in the main hallway. It’s a far cry from her nine years at the digital school ECOT.