Turning Ohio Into A Web Of Trails

In June, Ohio’s General Assembly designated 2018 as “The Year of the Trail.” Now that may sound like National Donut Day, but in this case the Ohio Department of Natural Resources is doing something about it.

ODNR has spent the summer asking the public where they would like to see trails built. The goal this year is to develop the Ohio Trail Plan.

It’s not the first time they’ve done this, which is why the Buckeye state already has some 3,500 miles of trails. That includes the largest loop trail in the country, the 1,400 mile Buckeye Trail, a circle that touches all four corners of the state. But now the idea is to connect those many local trails into one big network.

At one of the public meetings about trails in Akron, the ODNR’s Trail Coordinator, Tom Arbour said Ohio is unusual in the Midwest in that it has its own trail fund, the Clean Ohio Trails Fund.

“Indiana only has the Recreational Trails Program from the federal government which provides about a million dollars. We have six times that amount from our state funding, state bond money voted by Ohioans,” Arbour said.

Many trails supporters cite economic benefits for the state.

“You don’t know how many people I’ve talked to who said, ‘I moved to this part of Ohio and I fell in love with the trails. And I would never want to leave because of the Towpath Trail or because of the Ohio to Erie Trail or the Little Miami Trail in Southwest Ohio,’” he added. 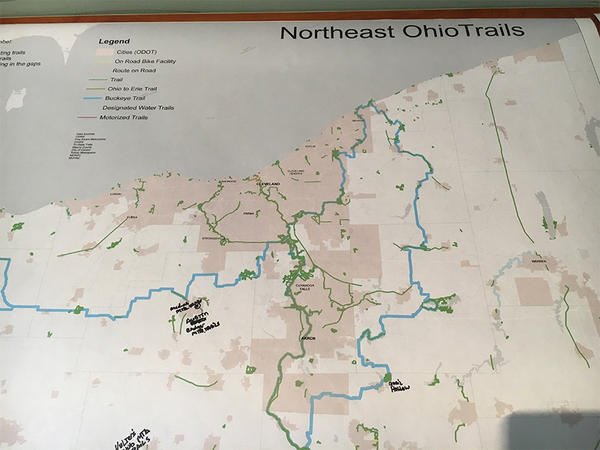 At the ODNR meetings, members of the public were invited to draw on maps where they would like to see a trail built or a connection made between two existing trails.

“We all have to go over to Michigan to be able to take our jeeps and ATVs onto motorized trails. Really, the only public motorized trails in the state that are on public land are the Wayne National Forest in southeast Ohio and those are for ATVs only, not for jeeps and full-sized trucks.”

Lake County does not have any trails for off-road vehicles, but it does have its own off-road organization, Lake County Off Road, or LCOR.

“I would say you have tens of thousands of Jeepers out there,” said LCOR founder Dennis Wylie.

He says off-roaders drop a lot of money traveling to neighboring states. And he adds they are willing to pay extra fees so they don’t have to drive out of state to go 4-wheeling.

“We’re willing to fund by paying additional trail permits - pay additional fees every time we use the trail system every day. It’s just a way of life for our hobby as we go to these other systems. So whenever they say, ‘Well, we don’t have the money to build trails.’ We’re willing to give them money. Nobody’s willing to take our money.” 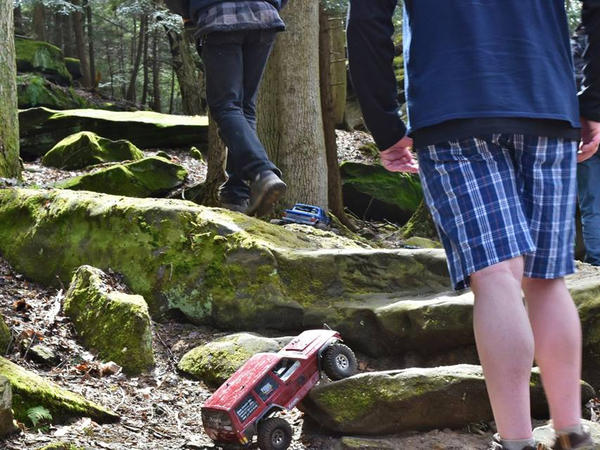 A newer kind of trail now getting focus are water trails for canoers and kayakers. Andrea Irland is an outdoor recreation planner for the National Park Service who wants to have the Cuyahoga River designated as a state and national water trail with pubic trailheads and parking lots.

“And that means to have designated access points so people know where to put in, where to take out, and what amenities are at each location so they can better plan,” she said, adding, “It also provides us with an opportunity to give them a map, safety information, educational information about the river.”

Supporters like Elaine Price of the Cuyahoga County Planning Commission say they want all the communities along the Cuyahoga to buy in.

“The big thing is the potential for branding for a community, driving economic development, not just through tourism but from having these assets and amenities that people of the 21st century want,” Price said.

Linking all these bike and hike and water trails around Ohio may need some approval from property owners.

“Everywhere you try to put a trail there is somebody who does not want a trail there,” said Irland. “And oftentimes – we see it more often than not - those folks who are opposed to the trail and want you to build a fence or put up bushes or not go in their backyard, are the first ones that want a gate in the fence so they get to the trail. We see it a lot. A lot.”

One bike and hike trail nearing completion is the 326 mile Ohio to Erie Trail. It will connect Lake Erie in Cleveland to the Ohio River in Cincinnati.

Cincinnati Parks have 10 top 10 rankings in a survey released Wednesday by the Trust for Public Land.

Author Rick Bass is renowned for his writing on the environment and for his environmental activism. In his latest book, The Traveling Feast: On the Road and at the Table with My Heroes, Bass goes on a journey to thank the writers he considers his mentors, visiting and preparing those who accept his offer an elaborate meal. Joining him in his travels are some of his past and current writing students, and through the sharing of food, experiences and conversation, he connects his mentors and mentees.

Kentucky’s aging drinking water and sewer systems need billions of dollars in investment to prevent system failures impacting public health and the environment, according to Kentucky’s Energy and Environment Cabinet.