A new WYSO analysis of state education data show Ohio school officials issued over 30,000 suspensions to kindergarten through third-grade students during the 2016 school year. In Dayton, the same data show hundreds of younger students are removed from classrooms each year.

It’s a problem many education policy experts around the country have been trying to tackle for years.

Research shows children who miss too much school often struggle to keep up when they return to the classroom. Some may never catch up to their peers.

Dayton native Zakiya Sankara-Jabar knows this all too well. Her experience with school suspensions began when her son Amir started preschool.

“And I remember almost as soon as he enrolled, within a week, I was getting calls from the preschool teachers,” Sankara-Jabar says.

The teachers told her Amir was being disruptive, that he was throwing temper tantrums and needed to be picked up from school. Sankara-Jabar, a college student at the time, says she was confused.

She knew Amir loved learning and hadn’t had many behavior issues before. So, she says she tried starting a discussion about the situation with his teachers.

“I said, is anything he’s doing abnormal for a three-year-old child? And the conversation ended up just changing,” she says. “I remember they would use coded language, like, you may want to get him evaluated, you may want to do this, and I was like, wait, evaluated for what?”

Amir was pulled out of class multiple times per week, she says. All those trips to and from his school during the week began taking a toll.

“I had to drop out of college because they were calling me so much,” says Sankara-Jabar. “They would call me while I was sitting in class to come pick him up. This happen[ed] all the time.”

WYSO's investigation finds Dayton school officials issued 650 suspensions to K-3 students during the 2016-2017 school year. That number has increased slightly each year since 2014.

Dayton Public Schools officials were unable to provide a comment in time for this story.

“What we find is that, nationally, young children are expelled in some communities at a greater rate than high school students,” says Dr. Valerie Alloy, a researcher who leads the state’s Early Childhood Mental Health Initiative.

Alloy says it’s difficult to nail down exactly how many kids are suspended or expelled from school at a younger ages because many private preschools don’t keep track. But, some data suggests the number is increasing.

“What the research is telling us is that expulsion is not a child-behavior problem,” says Alloy, “it’s an adult-decision problem.”

Alloy says there are often many factors that play into school officials’ decisions to remove a child from the classroom after they encounter a challenging behavior.

These can include, she says, “their own stress level, their perception of the child, the resources that the teacher may or may not have to support the number of children in the classroom.”

Preschool classrooms are often short-staffed. And teachers may feel additional stress related to having to purchase classroom supplies out of their own pockets despite low salaries, she says.

Research suggests poverty may also be a factor for children. A recent Yale University study found children from low-income families are more likely to be suspended or expelled from pre-schools. 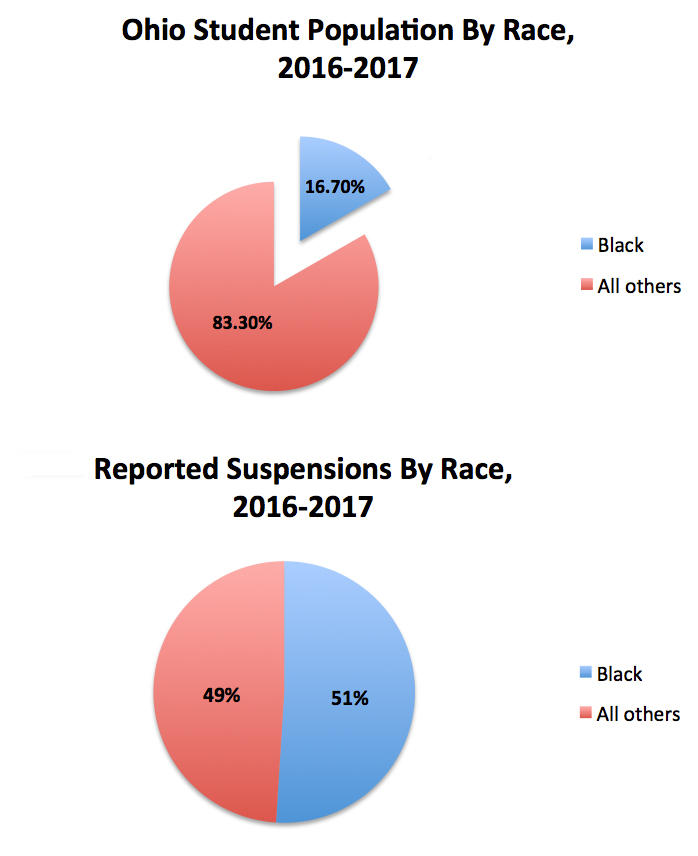 Although black students make up only 16 percent of Ohio’s total student population, they make up 51 percent of students suspended during the 2016-2017 school year.

Black male students are suspended more than any other demographic, with more than 65,000 total suspensions reported during the same year.

Alloy says research shows that any underlying behavioral issues are not resolved by removing children from classrooms. Instead, she says, the problems often grow worse.

“When little ones are out of school they are not well supervised,” she says. “They can become victimized and eventually they come into contact with criminal justice.”

Zakiya Sankara-Jabar didn’t want that to happen to her son. She pulled Amir out of the preschool that kept suspending him and eventually enrolled him in an all-boys school in Dayton.

And then, she says, she braced herself for the phone calls.

“I had experienced so much anxiety up until then,” says Sankara-Jabar. “I was prepared, I’m in the mode where I’m ready to protect my son as a mom. And I remember, a week went by, two weeks went by, and then the third week, I’m worried. I’m thinking, I wonder what’s going on, are they punishing kids without calling parents?”

She went to Amir’s school hoping to observe her son and speak with his teacher, Mr. Burress.

“So, I walked in and they were in there, the kids were up, jumping and clapping, and they were doing the hip-hop ABC recital, and I was like, oh, this is different. Mr. Burress was up out of the seat, he was engaging with the kids and Amir had the biggest smile on his face.”

“I asked him, how are things going, how is Amir? He said, ‘oh, he’s one of my best students!’ I was like ‘what?’ He looked at me and I remember the tears started to fall and I said, really? I had never heard anybody say that about him,” says Sankara-Jabar.

“He said, oh he’s extremely smart. Yeah, he has a lot of energy. That’s why we get up in the classroom we get up we move around.’ and he was just telling me about his teaching style.”

That experience confirmed what Sankara-Jabar -- who is African American -- had already suspected – that Amir just needed a teacher able to take a different approach.

After hearing similar stories from other parents she knew, Sankara-Jabar began pushing lawmakers to change the state’s school disciplinary policies in 2014.

It was recently attached to House Bill 318, which has now been approved by both chambers of the Ohio legislature.

The chemicals are the focus of a newly released government report showing they’re more dangerous than previously thought.

At the May 23 city commission meeting, Mayor Nan Whaley was clear: the ordinance is not about panhandling.

“Nothing in this ordinance criminalizes holding a sign on the side of a roadway,” the mayor said.

A Dayton artist is working on a new way to memorialize victims of the nation’s devastating opioid epidemic.

The project would create a memorial wall made of hand-cut mosaic tiles, called the  “Wall of Perseverance.”

The memorial is the brainchild of mosaic artist Jes McMillan, founder of the Mosaic Institute of Greater Dayton.