The 90 Second Naturalist
Weekdays at 9 p.m.
Hosted by Thane Maynard

Ninety seconds is all you need to make an unexpected discovery about the natural world—with The 90 Second Naturalist, you get a bite-sized nature doc every weeknight at nine. In this nationally syndicated segment produced by Cincinnati Public Radio with host Thane Maynard, director of the Cincinnati Zoo & Botanical Garden, every short show is a fascinating learning experience set to the background sounds of rainforest birds and insects.

This show isn’t only separated from other NPR podcasts by its quick length—its depth of detail and expertise sets it apart. You’ll see every topic that Thane Maynard touches on in a new light—silly animal trivia, serious conservation news, or both.

Here are some of the many strange and exciting topics from our recent archives:

A Florida native whose passion for nature and wildlife conservation was sparked by boyhood explorations into nearby swamps in search of alligators, Thane Maynard has been a fixture at the Cincinnati Zoo since 1977 and an icon of zoo culture since beginning to record his signature radio segment in 1987. He’s also a prolific author of books on wildlife, including one co-authored with the eminent researcher and conservationist Jane Goodall. The mission of his work teaching and writing mirrors that of the Cincinnati Zoo: to tell the story of biological diversity, natural history and wildlife conservation to the general public.

The 90 Second Naturalist is broadcast five days a week on 91.7, as well as at member stations across the country, and can also be listened to online wherever NPR podcasts are found—on the NPR One app, streaming services and a variety of smart devices.

The 90 Second Naturalist is brought to you by the Goering Center for Family and Private Business at the University of Cincinnati and is sponsored by the Johnson Foundation—creating meaningful change through thoughtful grant making. 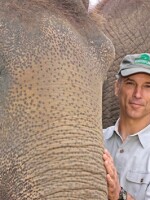