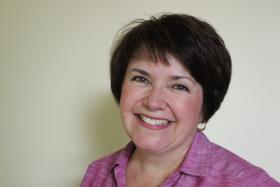 A Northeast Ohio native, Sarah Taylor graduated from Miami University in Oxford, Ohio where she worked at her first NPR station, WMUB. She began her professional career at WCKY-AM in Cincinnati and spent two decades in television news, the bulk of them at WKBN in Youngstown (as Sarah Eisler). For the past three years, Sarah has taught a variety of courses in the School of Journalism and Mass Communication at Kent State, where she is also pursuing a Master’s degree. Sarah and her husband Scott, have two children. They live in Tallmadge.

Cuyahoga County has the highest unemployment rate in the state at 12.9%. That statistic has led the state to pilot a new program there to help connect people to training and available jobs.

Called Ohio to Work, the program has been developed by the state’s JobsOhio agency, which its director J.B. Nauseef said today during the governor’s coronavirus briefing is uniquely capable of doing this quickly because of its structure.

Kent State has canceled plans on its campus to mark the 50th anniversary of the National Guard shootings that took the lives of four students on May 4, 1970. The University said it has made the decision "in the interest of the health and safety of the community," and also to comply with an order by state officials to stay home. The order takes effect Monday, March 23 at 11:59 p.m.

Jane Fonda will return to Kent State this spring. The university has announced her appearance is part of events planned to honor the 50th anniversary of the May 4th shootings.

Chic Canfora looks forward to Jane Fonda’s return to Kent State. “She was here in 1971," Canfora recalls. "She was here with a strong message that dissent is a powerful form of protection for our democracy."

When former President Bill Clinton was impeached in 1998, Senator Sherrod Brown was a representative in the U.S. House. Now as a Senator, he’ll be a juror in the trial of President Trump—deciding whether the impeached president should be removed from office.

Brown says the process has been much different this time.

What Would Lordstown Get in Workhorse?

News about a possible buyer for the GM plant in Lordstown is generating a lot of interest in the Cincinnati company being mentioned as the purchaser. A Cincinnati business reporter tells us more about Workhorse.

The Workhorse Group Incorporated grew out of electric vehicle maker AMP, which was founded in 2007.

U.S. Rep. Tim Ryan, who represents Akron and the Youngstown area, is running for president, but to say he’s a dark horse might be an understatement.

Brown Not Yet Saying Who He Favors As Democratic Presidential Nominee

With nearly twenty candidates now vying for the Democratic presidential nomination, one legislator who considered a run is comfortable with his decision not to. Sherrod Brown shared his view of the field.

It’s no surprise to Brown that so many candidates want to unseat the current leader, who Brown said has done a terrible job. Among the recently announced candidates is fellow Ohioan Tim Ryan, the democratic congressman from the Youngstown area. Brown is not saying who he’s supporting at this point.

There’s been a lot of talk in Washington recently about the “Green New Deal,” introduced by House Democrats to address climate change. Senate Majority Leader Mitch McConnell forced a vote on the bill in the Senate this week.

Funding for Ohio Military Projects Could be Diverted to Border Wall

General Motors Chief Executive Officer has responded to correspondence from Mahoning Valley students about the company's plans to shut down its assembly plant in Lordstown.

Students sent Mary Barra letters and drawings appealing for her to reconsider the plan to unallocate the Lordstown facility in March. G-M plans to end production of the Chevrolet Cruze, which is built there.

Dissatisfaction with current elected officials has led a number of newcomers to jump into the political arena this midterm election. One of the biggest challenges they face is raising enough money to run a competitive campaign.

Tuesday, Sept. 25 is National Voter Registration Day. Some groups are working hard to encourage voters to register and cast ballots in the midterm election this November.