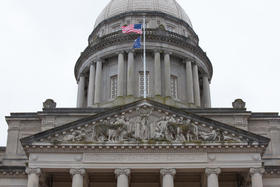 The legislative ethics law currently doesn’t include such language.  The ethics panel has investigated such cases in the past, mostly recently involving former House Speaker Jeff Hoover, but on the grounds of misuse of public office.

Legislative Ethics Commission Director John Schaaf told WKU Public Radio that updating the law would remove any questions about whether the panel has jurisdiction to investigate sexual harassment allegations against lawmakers.

"That question has routinely been raised by attorneys defending these cases, that since the ethics law doesn't include specific language addressing harassment, that the commission doesn't really have the authority to investigate and resolve these cases," explained Schaaf.

While the ethics commission has handled prior complaints, none of its findings have been challenged in court.

Complaints in the past have taken months to resolve.  Schaff says the recommendation also calls for an expedited process to investigate and settle cases within 30 days.

State lawmakers will consider the recommendation during the 2019 session that begins in January.

The Kentucky Association of Criminal Defense Lawyers is suing to block a constitutional amendment said to advocate for victims’ rights from appearing on the ballot in November.

Gov. Matt Bevin has appealed the ruling that struck down changes to the state’s pension systems. The Kentucky Supreme Court will hear the case on Sept 20.