Kentucky Slips 4 Spots to 37th in U.S. for Safe and Healthy Place for Childhood 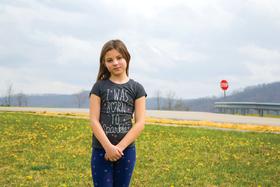 Kentucky has slipped to 37th place in a national ranking of states that provide a safe, secure and healthy childhood.

The second annual report End of Childhood State Ranking 2018 by the international nonprofit Save the Children ranks states by factors that can prevent children from thriving. Those factors include violence, poverty, malnutrition, child abuse, incomplete education and homelessness.

Kentucky has slipped four places since last year to 37th in the U.S. for states that provide consistent food, housing, prenatal care, safety from violence and abuse and access to early childhood educational opportunites.

Shane Garver is director for U.S. field operations for Save the Children and is based in Berea, Kentucky. He said priority issues in the Bluegrass State include teen pregnancy and access to prenatal care for all women, especially when that’s complicated by rural isolation and poverty.

“In many counties there’s not a hospital at all and they have to travel several counties away to deliver,” said Garver.

He said another important issue is access to preschool because the benefits have been shown to help kids be successful through all their school years.

Across the U.S., one in five children grows up in poverty. Of the U.S. counties with the highest poverty rates, 90 percent are rural. Poverty in rural areas keeps millions of children from reaching their potential.

“It’s not uncommon here in Kentucky to see communities where it’s 35 to 50 percent of rural children living in poverty,” said Garver.

The impact of negative factors on childhood has pushed the U.S. behind many other countries when it comes to providing kids with an enviroment and services to allow them to fulfill their potential.

According to the report, America ranks 36th in the world in providing a safe, secure and healthy environment for children. The U.S. ranks behind Norway, France and the United Kingdom and even lags behind Portugal, Spain, Japan, Lithuania and Greece.

The best states for childhood in the U.S., according to the report, are Connecticut, Massachusetts, New Hampshire and North Dakota. The worst states for children to grow up in are New Mexico, Oklahoma,  Mississippi at 49th and Louisiana ranking 50th.

Only Half Of Teens See Financial Independence As An Important Goal: Study

This March, Junior Achievement USA and AIG surveyed 1,000 teens to learn their perceptions about personal finance and financial decision-making. The survey found that while 75 percent of teens who responded listed their top financial goal as graduating from college, only half thought gaining financial independence from their parents was an important goal. And 43 percent worry they don't have the skills they need to manage their money.

The Women’s Fund of The Greater Cincinnati Foundation works to ensure the economic self-sufficiency of women in our region and ignites a shared desire to improve it.

Raising Families Out Of Poverty And Raising The Bar

The Easterseals' Prosperity for All is not the first program to address the individual needs of families working their way out of poverty. The Family Independence Initiative is another local model that invests directly in families. But Prosperity for All has been so successful after a two-year pilot, that the Cincinnati chapter of the Easterseals is expanding the program.