Prosecutors dropped eight aggravated murder charges on Friday against Angela Wagner, who was charged with her family in the elaborately planned, execution-style slayings of eight members of another southern Ohio family in 2016.

In exchange, Wagner, 50, agreed to plead guilty to 14 lesser charges — including conspiracy to commit aggravated murder, burglary, possession of firearms, tampering with evidence, forgery, obstructing justice and engaging in a pattern of corrupt activity. She'll also testify against her husband and oldest son in the case. She agreed to serve 30 years in prison with no option for early release.

Wagner, who some have suspected to be the mastermind in the family’s elaborate murder plan, faced 22 crimes in the cold-blooded slayings of the Rhoden family in Pike County.

“Our society reveres mothers for taking care of their children and teaching them to do the right thing, even when it's hard,’’ Ohio Attorney General David Yost said in a statement. “But by actively plotting the murder of an entire family and encouraging her kids to carry out the violence, Angela Wagner abjectly failed in her responsibilities.”

Dressed in black-and-white striped jail clothes, Wagner sat nearly motionless during most of the hearing and only responded “yes, sir” and “no, sir” and “I plead guilty, your honor” to Pike County Common Pleas Judge Randy Deering’s questions. She did not look at any of the Rhoden family members in the courtroom, including Rhoden family matriarch Geneva Rhoden who was — as she always is — seated in the front row.

The plea deal will mean Wagner will remain separated from her husband and two adult sons. It also means she will likely never see the granddaughter whose custody prosecutors say was the motive in Ohio’s most complex criminal investigation.

The state’s deal also spares Rhoden family members from at least two grisly trials that would have cost taxpayers millions of dollars. It is unclear, however, what it may mean to the cases facing her husband, George “Billy” Wagner, 50, and their oldest son, George Wagner IV, 30. Both have court hearings scheduled for next week with an April trial date set for George Wagner IV.

In a key turning point in the case, Wagner’s youngest son, Edward “Jake” Wagner, 28, pleaded guilty in April and agreed to testify against his mother, father and brother to spare them the death penalty. The Wagners were arrested in 2018 and have remained jailed separately since.

Jake Wagner’s statements gave prosecutors what they needed in the case: details of the killings from someone involved and further evidence to corroborate what investigators had painstaking gathered.

Prosecutors have described the Wagners as a clannish family who did everything together, including methodically plotting the killings of Dana Manley Rhoden, 37; her former husband, Christopher Rhoden Sr., 40; their children, Hanna Mae Rhoden, 19, Christopher Rhoden Jr., 16, and Clarence "Frankie" Rhoden, 20; Frankie's fiancée, Hannah Gilley, 20; Christopher Sr.’s brother, Kenneth Rhoden, 44; and their cousin, Gary Rhoden, 38. They were all shot in the head; many multiple times.

Authorities have painted a picture of a souring relationship between the two families that focused on a bitter custody battle between Jake Wagner and Hanna Rhoden for custody of their daughter, Sophia. Hanna had broken off their relationship and had become involved with another man with whom she had a second daughter. Prosecutors have said that Jake wanted sole custody because he believed Hanna “was exposing Sophia to people that he believed she should not be around.”

Friends and family described Hanna as a loving and doting mother who would never have voluntarily relinquished custody. Special prosecutor Angela Canepa said investigators found a Facebook message that Hanna wrote to a friend saying the Wagners "would have to kill her" before she gave up custody of her daughter.

In the months preceding the deaths, the Wagners bought guns, built silencers, spied on members of Rhoden family members, hacked into computer accounts and jammed cell phones as part of their plan.

They enlisted Angela Wagner’s mother, Rita Newcomb, to help cover up their forgery of documents outlining that if anything happened to Hanna, Jake would get full custody of Sophia. Hanna Rhoden’s signature was forged on those documents, which were backdated more than year before the slayings. However, prosecutors said they were printed out at the Wagner home three weeks before the Rhoden slayings. Newcomb said she initially told authorities she signed the documents because her daughter told her to do so. Newcomb pleaded guilty to a lesser charge of obstructing justice two years ago.

Canepa said Friday Wagner was the person who signed Hanna’s name and her mother’s name on the documents. 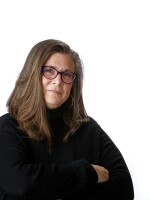 Chris Graves
Chris Graves was a former columnist at The Enquirer. She is now an assistant professor at the University of Nebraska - Lincoln College of Journalism and Mass Communications. She continues her reporting into this case.
See stories by Chris Graves
You might also like