A Celebration of Larry Goshorn

WVXU celebrates the life and music of Larry Goshorn with a lively roundtable discussion and a selection of his recordings.

Larry Goshorn has been playing music on stages around Cincinnati and across the country for decades. From Tommy’s on Main with the Goshorn Brothers & Guests to large stadiums with Pure Prairie League, Larry’s vocal and guitar work has made him special in the eyes of his many loyal fans.

Larry was the honored guest for the roundtable recording in WVXU’s studio on Tuesday, May 3, 2016.

Also featured in the program are recorded interviews with the following:

Music Referenced in the Program: 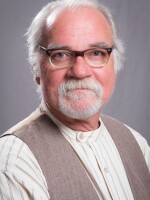 Brian O'Donnell
Brian O’Donnell has been sharing his love of music on the radio since the early 1970’s. He is a true public radio renaissance man hosting classical music on 90.9 WGUC weekday mornings; contributing music and arts features for 91.7 WVXU’s Around Cincinnati program; and hosting Saturday Morning with Brian O’D on WNKU. Musicians, artists and community arts leaders regularly stop by to record interviews with Brian— from Jaime Laredo with the Linton Music Series, or J.R. Cassidy from the Northern Kentucky Symphony, to a curator of an exhibit at The Cincinnati Art Museum, or a soloist in town to perform with the CSO, his relaxed style puts everyone at ease and lets their story come through.
See stories by Brian O'Donnell
You might also like