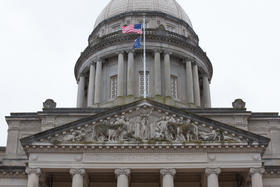 Drivers will need to maintain a three-foot buffer when they pass bicyclists, health educators will be required to teach sex abstinence in public schools and sweeping changes to Kentucky’s adoption and foster care system are all included in new state laws that go into effect on Saturday.

New laws take effect 90 days after the state legislature adjourns unless they have a special effective date or have an emergency clause — which would make them effective immediately.

The legislature wrapped up on April 14 this year, meaning most new laws will officially begin on July 14.

One of the most high-profile laws that passed out of the legislature this year — changes to pension benefits of state workers — has been blocked by a court and will not take effect on Saturday, as scheduled. Gov. Matt Bevin has indicated he’ll appeal that ruling.

Changes to the state’s tax code — which expanded the sales tax to 17 previously untaxed services and flattened personal and corporate income taxes — went into effect on July 1st.

In all, the legislature passed 197 bills during this year’s General Assembly. Here are some of the laws that will begin on Saturday:

Child Marriage Ban — 16 and 17 year-olds will no longer be allowed to get married with parental permission, nor will children younger than 16 be able to get married as long as they’re pregnant. The “child bride” ban makes 18 the legal age of marriage in Kentucky, but still allows judges to grant marriages to 17 year olds when they determine it’s in the child’s best interests.

Foster Care And Adoption Changes — this law tries to reduce barriers for people who want to adopt and gives the state more options to terminate the parental rights of negligent parents.

The legislation would consider babies born with drug addictions to be “abused or neglected,” meaning the state could take steps to terminate parental rights unless the child’s parents take steps to get clean.

The bill would expand the definition of a “blood relative” to ensure that foster children can be put into the care of extended family, step-relatives and other close relations.

It would also create a “putative father registry” where men who believe they could be a child’s father can register in order to have a say in whether a child is adopted.

Gang Law — the legislature voted to broaden the definition of criminal gangs, give longer prison sentences to those labeled as gang members and increase penalties for gang recruiting.

Supporters say the measure would discourage gang activity in the state, but opponents argue it would wrongly label some defendants as gang members and disproportionately affect African American communities.

Officials estimated the bill would cost Kentucky about $19.5 million more in incarceration costs over the next ten years.

Bicycle Passing Buffer — car and truck drivers will be required to keep their vehicles three feet away from bicycles while attempting to pass them. If there isn’t enough space on the roadway to provide a three-foot buffer, vehicles are required to use “reasonable caution.” The law also forbids cyclists from riding more than two abreast in a highway lane unless the road is marked exclusively for bicycle use

Police Body Camera Records — body camera footage that shows the interior of private homes, medical facilities, jails and prisons, or a nude body, dead body or a child will be exempted from open records requests.

Breweries — visitors to Kentucky microbreweries will be allowed to take home up to 31 gallons of beer: the equivalent of two kegs. Currently the limit is two dozen 12-ounce beers, or a little over two gallons.

A sweeping bill that would overhaul Kentucky’s foster care and adoption system is nearing final passage in the state legislature.

The parents of Bailey Holt and Preston Cope, two 15-year-olds killed in the Marshall County High School shooting in January, testified to a group of lawmakers Monday, urging them to make schools safer before students return to the classroom this fall.