A coveted seat in the Kentucky House will soon have a new representative for the first time since 1976.  Former House Speaker Jody Richards announced earlier this year he would not seek re-election.

Ahead of the May 22 primary, WKU Public Radio is airing a series of reports introducing you to each of the five Democrats and three Republicans seeking to replace Richards.  Democrats Brian Slim Nash and Patti Minter were profiled in a previous story.  The remaining three Democrats in the race, Ashlea Shepherd Porter, Rick DuBose, and Eldon Renaud, are heard in this report.

On a weekday evening at State Street Baptist Church, the candidates for Jody Richards’ House seat are pressing the flesh at a meet-and-greet.  Five of them want to keep his seat blue, three are hoping to turn it red.  For Eldon Renaud, mingling with voters comes natural.  He served as Bowling Green mayor from 1996 to 2000 and president of the local United Auto Workers Union.  Renaud says he knows what it means to be public servant.

"People who know anything about me know that I’ve represented working people all my life when it comes to supporting people for better wages, pensions, and things like that," Renaud commented. "I’ve been an advocate for raising everybody’s boat all my life.” 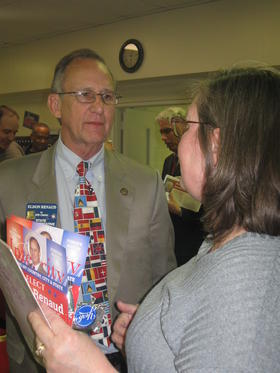 Renaud has good name recognition in this race, but so does another one of his Democratic opponents, Rick DuBose.  While he’s never run for public office until now, DuBose laughs and says that he’s been a politician his whole life.

“I’ve just been a people person. Everything I’ve done has been a sales or community relations type of position," said DuBose. "That part of it is not hard for me.”

DuBose is retired from Western Kentucky University as the former assistant vice president of development and alumni relations.  Before that, he worked in broadcasting and in business with the Bowling Green Area Chamber of Commerce.

A true political newcomer seeking the Democratic nomination is Ashlea Shepherd Porter, but she says it’s not technically her first campaign.

"I’ll tell you truth be told, I ran for 3rd grade president and I did win, but I won a very sneaky way," Porter explained. "I promised everybody an extra snack if they voted for me.”

Porter jokes that she got all of her political scandals out of her system by age nine.  At 34, Porter is the youngest of the Democratic candidates.  She’s been a family law attorney for nine years.

For Renaud, DuBose, and Porter, protecting public education and pensions is at the heart of their campaigns.  All equally disapprove of Kentucky’s new pension reform law, both its substance and what they describe as the lack of transparency in how lawmakers recently passed the bill. 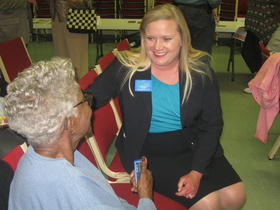 Porter thinks the fight for pensions is just getting started, and if elected, she says she would work to repeal portions of the law, particularly the part that affects teachers.

“It’s going to take seven additional years and five billion extra dollars to fully fund our pensions, and we have lawmakers who say, ‘Look what I did.’ Well, you did do something, but you made it worse," Porter told WKU Public Radio.

Porter says she read the entire 291-page pension bill. She says her background as an attorney gives her the skills to interpret legislation and find out exactly what it means for constituents.

For Rick DuBose, the pension fight is personal.  His wife and daughters are teachers.  He fears Kentucky may lose good educators. 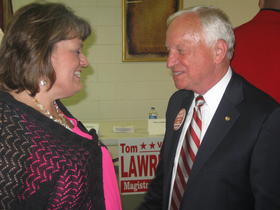 “If we’re going to keep young teachers in the system, if we’re going to bring in quality teachers, then they have to be able to count on the state to honor what they promise," DuBose remarked.

Renaud says he stood with teachers during rallies at the State Capitol during this year’s legislative session.  He  thinks newly hired teachers deserve a defined benefit pension plan, which was afforded to retired and current teachers.  If elected, Renaud says he would work to fully fund pre-school through postsecondary education.  He says lawmakers need to start treating education as an investment in Kentucky’s economy.

All of the Democratic candidates believe Republican Governor Matt Bevin and the GOP-controlled General Assembly have given their party momentum heading into this year’s elections.  Their sights are set on retaking the House, which they led for nearly a century before the 2016 elections.

Ahead of Kentucky's May 22 primary, WKU Public Radio will also report on the three Republicans in Kentucky's 20th District House race, including Ben Lawson, Troy Brooks, and Todd Alcott.

What Does The Supreme Court Ruling On Sports Betting Mean For Kentucky?

The Supreme Court on Monday struck down a federal law that could allow states to legalize sports betting, potentially paving the way for Kentucky to rake in millions on sports bets.

Rand Paul still says he will vote against the confirmation of Gina Haspel to be the next director of the CIA, citing her role in the intelligence agency’s brutal interrogation program more than a decade ago.

Community members gathered in Radcliff on Saturday to mark the 30th anniversary of the deadliest drunk driving crash in American history.

The accident took place on May 14, 1988, when a drunk driver hit a church bus carrying 60 people on Interstate 71 near Carrollton, Kentucky.