How Can Ohio Cities Step Up Their Response To Overdoses? Make The Data Public

This story comes from The Ohio Center For Investigative Journalism. Find out about local events focused on solutions to the opioid crisis below.

The most dangerous time for Cincinnati heroin addicts is not a typical party time: 3 p.m. on Wednesdays. For Columbus, it’s 6 p.m. on Thursdays, and in Akron, 7 p.m. on Tuesdays.

In a few Ohio cities, online interactive databases now let anyone with a browser track the strange course of opiates, sometimes even daily, as a few jurisdictions have experimented with a new weapon in the arsenal aimed at addiction: public release of overdose data.

Emergency services personnel long have used the information to reduce response times by pinpointing the areas of greatest need, but now the community can see where new hotspots are popping up. This has allowed authorities to alert the public and aid workers to more quickly target troubled areas.

“This drug is different than most other drugs,” said Tom Synan, police chief in Newtown, east of Cincinnati, and co-chair of the interdiction committee of the Hamilton County Heroin Coalition Task Force.

“While people who bought crack or meth would buy their crack or meth, then drive home and do it, here, because of the physical opiate withdrawal, it is so powerful that often we find the person overdosing near the location where they bought the drug,” Synan said.

He monitors Cincinnati’s Heroin Dashboard, in addition to his own police information, and says he sends out a warning if the newest street drug turns out to be a particularly potent poison.

“We’re not naive enough to think that if we tell someone to stop using drugs, they’re going to stop using drugs because they’re bad drugs,” he said. “But what it does do, is it does alert families. And that person who’s on the edge, it might be something where a family member can take them in.

“The negative is the public gets numb from it if you put out too many alerts,” Synan said.

The Cincinnati Heroin Dashboard is updated daily using data from 911 calls to show the time, location, and administration of naloxone, also called Narcan, which can reverse the effects of heroin. The city obscures the person’s full street address and randomly alters the latitude/longitude slightly so that it maintains privacy while still mapping calls to within a block. 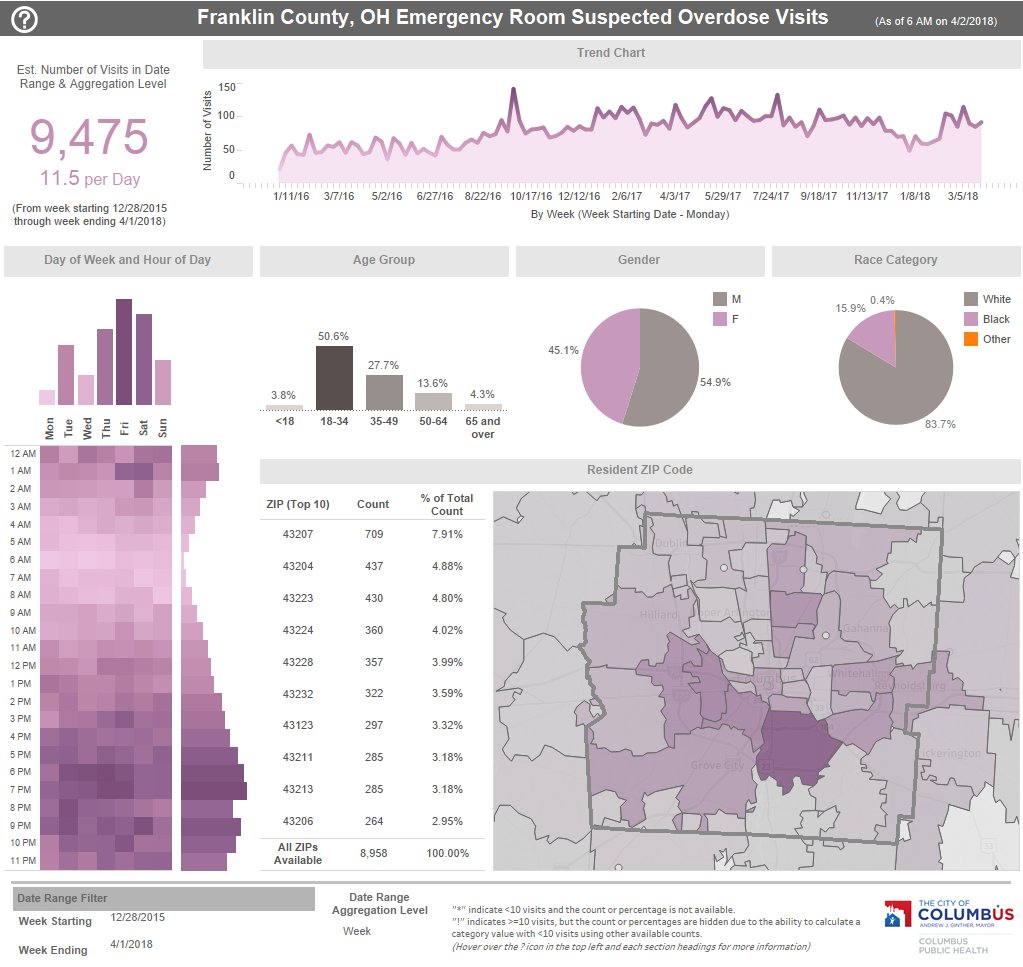 The dashboards for Columbus and surrounding Franklin County, and for Akron and surrounding Summit County, are slightly different: They track all suspected overdoses, not just heroin, though they show only patients transported to an emergency department. Maps are based on the ZIP Code of the patient’s home address. Clermont County, east of Cincinnati, uses data from both 911 call data and Emergency Room Data.

Cincinnati’s Data Analytics team started the project in 2016 after an unprecedented spike in drug deaths, said Leigh Tami, chief performance officer and director of the team.

“Paramedics are supposed to do, on one 24-hour shift, between eight and 12 runs – eight to keep their skills sharp, so that is the minimum,” she said. “Twelve is the max; we don’t want to burn them out, for obvious reasons.

The Ohio Center for Investigative Journalism, a nonprofit investigative news site, asked officials from 32 Ohio cities and counties whether they have or plan to develop similar dashboards.

Several local officials said they had no plans to release 911 overdose data to the public but they said they look at the data to ensure adequate response times, and several have started drug-abuse response teams.

Several smaller counties said that they do not have the resources for such a project and that it wouldn’t work logistically in a rural area — an overdose flagged a block away from a patient’s home doesn’t ensure privacy if there are few other houses nearby.

Furthermore, for counties that subcontract emergency care to a third party, the 911 call log and the EMS incident reports are often in different places. So a caller describing an unconscious patient could be alerting authorities to a heart attack or a drug overdose, and gathering data on each result might mean coordinating with dozens of ambulance services.

Ohio has scrambled to tame the many-headed monster that the opioid problem has become, particularly after late 2016, when the addition of more potent heroin additives led to a dramatic increase in deaths. Lawyers, doctors and legislators all have sought to stem the tide in various ways.

Ohio opioid prescriptions have dropped 28 percent since their high in 2012, from 793 million to 568 million doses in 2017, according to the Ohio State Board of Pharmacy. New rules that went into effect this past August limit opioid prescriptions, in most cases, to a seven-day supply for adults and five days for minors.

At least six Ohio government entities and the Ohio attorney general have sued opioid pharmaceutical companies, alleging that the companies understated the addictive effects of their products, which led to more people hooked on pills, and eventually more people turning to street drugs.

In December, a federal court consolidated approximately 400 similar cases nationwide. The Cleveland judge in charge of the case has said that he would prefer a global settlement to protracted litigation.

And the state has paid millions of dollars for health care, emergency services, and fees related to opioid addiction. The The Ohio Department of Mental Health and Addiction Services paid a half million dollars last fiscal year alone to distribute naloxone, the opioid antidote.

It’s difficult to assess just how effective these attempts to stem the flow of opioids have been or will become. The number of accidental overdose deaths rose again last year.

The rate of increase has slowed, however, said Cory Kendrick, director of Population Health at the Summit County Public Health department.

“We’ve definitely seen a drop in overdoses. And so, what we don’t know is: Is the issue getting better? Or is because we have distributed so much Narcan?” Kendrick said.

Having Narcan is key, but it’s also important to know where to target it, said Teri Nau, community relations director at Talbert House. The nonprofit group used Cincinnati’s heroin portal to see which neighborhoods might benefit from Narcan information sessions. So far, the group has given away 700 kits in 28 sessions to groups interested in how to use the antidote.

Doug Oplinger, project manager at Your Voice Ohio, a broad-based, statewide coalition of Ohio news organizations, agreed that sharing more information with the public is important to abating the opioid epidemic. That is the current focus of the nonprofit group: to bring communities together to discuss the problem and seek viable solutions.

So far, Your Voice Ohio has connected 40 news organizations with the public at meetings in Youngstown, Warren, Dayton, Middletown, Cincinnati, Wilmington and Washington Court House. The group has three more events planned in central Ohio on April 22 in Hilliard, April 23 in Marion and April 24 in Newark. Anyone who reserves a spot can attend the meetings, which are free and open to all.

“The families are affected just as much as the addict is,” said Sierra Smith, of Washington Court House, who is recovering from addiction. “And they have nowhere to turn. It would be better for them to have a place to go to have more of an understanding. Especially if they aren’t an addict themselves, they don’t understand.”

Smith, 28, has been clean for 19 months, and said she thinks one important answer is more information for families and those caught in the grip of drug abuse.

“We need to have more events with addicts who have been clean for so long, sharing hope,” Smith said.

Your Voice Ohio will hold public conversations across Central Ohio in April, with the hope of engaging people about whether opioids have affected their lives and how. They’ll be asked how the area would look if it were successfully turning the crisis around and what must be done to do so.

You can register for the Columbus-area event now:

So now we ask: What questions do you need answered to help your understanding? What solutions do you suggest?

No one in Kentucky is more than one person removed from the opioid epidemic, according to state health officials meeting Monday with U.S. Surgeon General Dr. Jerome Adams. The visit comes just days after Adams' call for more people to carry the overdose reversal drug naloxone.

Focusing On Success Stories In The Fight Against Heroin

Much of the reporting on the heroin crisis is focused on the tragic aspects of the epidemic, leaving people feeling helpless and hopeless without an end in sight. A local organization, the Urban Minority Alcohol & Drug Abuse Outreach Program (UMADAOP), says getting out a message of help and hope is equally as important as telling the story of risk and loss.