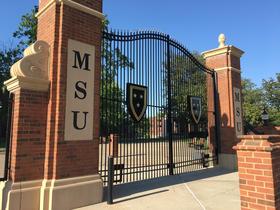 The Republican parties of Marshall and Calloway counties are hosting "The Night Before Fancy Farm." The doors open at 6 p.m. and the event begins at 7 in Lovett Auditorium on the main campus. According to a release, Murray State is closing all campuses from 3 p.m. to 9:30. The university is expecting a large number of visitors on the main campus and is locking all doors south of the Curris Center by 3 p.m. for security purposes.

The university is calling on the campus community to lock doors behind them when entering and exiting buildings, to enter and leave the building on a side opposite of Lovett Auditorium and to not allow inside buildings strangers or people without university work to perform.

President Bob Davies and Provost Mark Arant said in a joint letter, “Thank you for your cooperation in helping to maintain a safe environment for the entire Murray State University community.”

Murray State University Police posted a notice on Facebook that the Federal Aviation Administration has established restricted airspace over the campus during the event. All unmanned aerial vehicles (drones) will be banned from 3 p.m. until 10 p.m. on Friday. Operators will be subject to criminal charges.

A group of Marshall County High School students, a survivor of the 1997 Heath High School shooting in McCracken County, relatives of an Antioch, Tennessee, Waffle House shooting victim and progressive groups are planning to protest North's appearance. Marshall shooting survivors say inviting the NRA president to speak in a region where a deadly school shooting occurred only six months ago is insensitive. The demonstration begins at 4 p.m. near the Curris Center and will include speeches and a “silent vigil” in front of Lovett. Planners say they “have taken steps to keep the protest peaceful and avert confrontations.”

The Marshall County GOP has said insensitivity was never their intent.

Murray State University Director of Communication Shawn Touney has said in an email to WKMS the MSU Police Department routinely makes outside agencies such as the Murray Police Department and Calloway County Sheriff’s Office, aware of events which may bring a significant amount of people to campus, including the Friday event.

Touney said MSU Police will provide support on campus that evening, including the enforcement of University policies, which includes a prohibition of firearms. Individuals in violation of campus policies are subject to immediate removal and other potential legal actions.

"As a safety precaution, the University will not be providing further specifics regarding procedural details concerning event support that evening," Touney said.