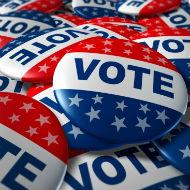 Listen
Listening...
/
How the numbers shift with third-party candidates

The poll shows Trump edging Clinton 46 to 45 percent in a head-to-head matchup. But 14 percent would opt for Libertarian Gary Johnson and 4 percent for the Green Party’s Jill Stein. And when that happens, Trump’s edge grows to 4 points, 41-37 percent.

Trump continues to have the support of white men in Ohio, while Clinton is stronger with women and non-white voters. Independents are about evenly split, and for the most part, voters who identify as Democrat or Republican are sticking with their nominee.

The Quinnipiac poll measured three other swing states: Florida, North Carolina and Pennsylvania. Only in Ohio did third-party candidates make a significant difference; in the other three, they took equally from both Trump and Clinton.