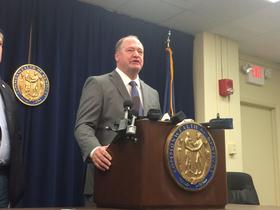 State Rep. Jeff Hoover and two others are suing a former staffer for allegedly violating a confidentiality agreement regarding her allegations of sexual harassment.

Hoover, Rep. Michael Meredith of Oakland and former Rep. Jim DeCesare of Bowling Green filed the suit in Fayette Circuit Court on Wednesday, saying that the woman violated the confidentiality agreement shortly after they reached a $110,000 settlement with her, signed on Oct 25, 2017.

It also claims that the day after the settlement was signed, she told then-House Clerk Brad Metcalf about the agreement in a conversation Metcalf recorded.

Both Olivo and Metcalf were fired from their positions and have filed whistleblower lawsuits against the state, saying they were retaliated against for reporting sexual harassment in the legislature.

Earlier this month, the Kentucky Center for Investigative Reporting and Kentucky Public Radio obtained a copy of a deposition the former staffer gave in those lawsuits. In the deposition, she alleged that Hoover sexually assaulted her by touching her without her consent.

The new lawsuit filed by the lawmakers states that the lawmakers “categorically denied and disputed any unwelcome or harassing conduct” towards the former staffer.

“However, given the newsworthy nature of allegations of alleged misconduct against then legislators, Plaintiffs agreed to meet and mediate this dispute,” the lawsuit states.

According to the final settlement agreement, the $110,000 paid to settle her claims of “harassment, assault/battery” and “retaliation” included three lawmakers as well as former Rep. Brian Linder of Dry Ridge and former chief of staff to the House Republican caucus Ginger Wills.

The existence of the settlement was first revealed by the Louisville Courier Journal days after it was signed, leading Hoover to step down from his position as speaker, but keep his seat as a state representative.

Hoover admitted to exchanging sexually-charged text messages with the woman but has repeatedly denied sexually harassing her.

But in sealed testimony given in the whistleblower lawsuits last October, the former staffer alleged that Hoover repeatedly groped her without her consent over her employment between 2015 and 2017, behavior which she said rose to sexual assault.

In the lawsuit filed Wednesday, Hoover and the other lawmakers say they have sustained “damage to their reputations” as a result of the alleged breach in confidentiality.

The lawmakers are seeking to recover the $110,000 paid in the settlement, compensatory damages, consequential damages, attorney’s fees, and costs.

When the woman who would become known as Jane Doe started working for the Kentucky House Republican caucus in 2015, she remembers a senior staffer saying her responsibility was “to keep Jeff Hoover happy.”

At the time, the woman was 21. Ky. Representative Jeff Hoover of Jamestown was the leader of the Republican minority in the state House of Representatives. Within two years, Hoover would become the first Republican speaker of the House in nearly a century.

Listen
Listening...
/
Click the player to listen to a new investigation in which a former staffer details her allegation of sexual assault against Ky. Rep. Jeff Hoover of Jamestown.

A lawyer for former House Speaker Jeff Hoover and two other Republican lawmakers made the case on Wednesday for sealing a former staffer’s testimony that she was sexually assaulted and harassed by the men.

Former House Speaker Jeff Hoover has admitted that he violated state ethics rules by exchanging sexually charged text messages with a legislative staffer who used to work for him.