Carter G. Woodson was a historian, author and journalist, known to many as the “Father of Black History Month.” And Kentucky is a part of his story.

Woodson was the son of formerly enslaved parents. After the Civil War, his family relocated to West Virginia, where he spent his childhood.

In 1897, he enrolled in Berea College in Kentucky, graduating with a bachelor’s degree in literature. Yet, Woodson spent much of that time outside of Kentucky.

Jessica Klanderud, director of the Carter G. Woodson Center for Interracial Education at Berea College, said that was in part because Woodson was already working full-time, as a high school principal in West Virginia. But Kentucky was preparing to strengthen its segregation laws while Woodson was attending Berea College. Klanderud said that political climate might have also contributed to why Woodson spent so little of his collegiate career in Kentucky.

Klanderud, who is also an assistant professor of African and African American Studies at the college, spoke to WFPL News about Woodson’s legacy in Kentucky and the Appalachian region.

Read the interview at WFPL.org >> 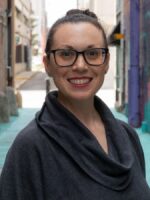