Even Before Charlottesville, Ohio's Hate Groups Had Been On The March

Earlier this week, before a press conference about the arrests of gang members, the U.S. Attorney for Ohio’s southern district, Ben Glassman, did something unexpected: He spoke out against the violence in Charlottesville, Va.

“One civilian was killed and two police officers died in the line of duty,” Glassman said.

Then he pointed to the history of Department of Justice and why it was created in 1870.

“Was to investigate and prosecute terrorism by the Klu Klux Klan,” he said. “That was under the leadership of President Ulysses Grant, a native of the southern district of Ohio.

Charlottesville's protests against the removal of Confederate monuments, initiated by a rally of white supremacist groups, led to the death of three and the injuries of dozens of others. Ohio is closely connected, with a Toledo-area man charged with murder after allegedly driving a car into a crowd of counter-protesters.

According to Paul Becker, a professor of sociology at the University of Dayton, the Ku Klux Klan has a long history in Ohio.

He says he started researching the KKK and other hate groups in Ohio back in the ‘90s: “You know, reading their newsletters, trying to understand things from their perspective.”

For his research, he attended a number of hate group rallies.

“In the 1990s there was a Klan group that had a goal one year to hold a rally in every county in the state,” Becker says. 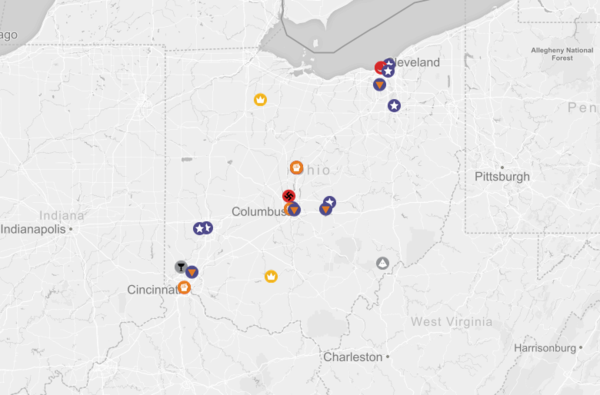 At these and other demonstrations, Becker says that contrary to common stereotypes of the ignorant racist, many of these participants were well-spoken and educated. And they knew how to attract media attention to help spread their message.

“They know that if they hold a rally, they're going to have the counter protesters,” Becker says. “There's always going to be the chance for violence, and that's what they're hoping for.”

According to the Southern Poverty Law Center, 35 known hate groups are located in Ohio. There are churches that promote anti-Semitism and anti-LGBT ideology, Black separatists, anti-Muslim groups, and of course white supremacists.

But it's hard to track their activity and to know for sure how big these groups are and if there are others. Becker says the available data rely on reports from the media and law enforcement.

"So there could be activity in rural areas that don't get the media attention, so they may be missed," he says.

For years, the KKK has gone out at night to distribute recruitment fliers in counties throughout Ohio, but Becker says it's not clear how many people are involved.

"So again that could be 5 or 10 individuals that are identifying themselves as a Klan group and are trying to get their message out, or it could be one person, it could be 100," he says. "It could be 200." 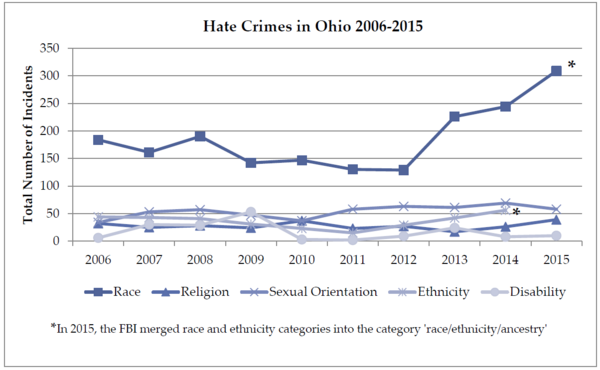 According the state Department of Public Safety, the rate of hate crimes in Ohio is twice the national average and has been climbing steadily since 2012. Becker says that doesn't necessarily point to hate groups.

"The research that was being done on who was committing hate crimes, most of those weren't committed by organizations," Becker says.

The Internet has become instrumental in helping hate groups organize. The world’s most visited neo-Nazi website, The Daily Stormer, was started by a man from Worthington, and for years the site received mail at a Worthington address.

When it comes to the events in Charlottesville, Becker says it's important to understand that the impetus for this big alt-right and white supremacist gathering was the removal of the statue of Confederate general Robert E. Lee. That's because these groups don't tend to agree on much, or work together.

"Extremist movements have always been splintered, so I think anything that could bring them together could potentially be dangerous," Becker says.

As cities like Baltimore, Md., and Lexington, Ky., call for the hastened removal of their confederate statues, Becker says it's likely we'll see more public demonstrations by these groups.

Ohio has some 300 monuments dedicated to the Civil War, most of which are small placards, and several of which represent the Confederacy,  The largest are two cemeteries for Confederate soldiers, including Camp Chase here in Columbus.

Camp Chase, unlike monuments in other cities, originally served during the Civil War as a Union Army training center and prison camp where thousands of Southern soldiers and loyalists died. Some 2,260 people are buried at the cemetery.

Officials say there have been no efforts to remove any relics there.

Correction: An earlier version of this story incorrectly stated the number of Confederate monuments in Ohio.