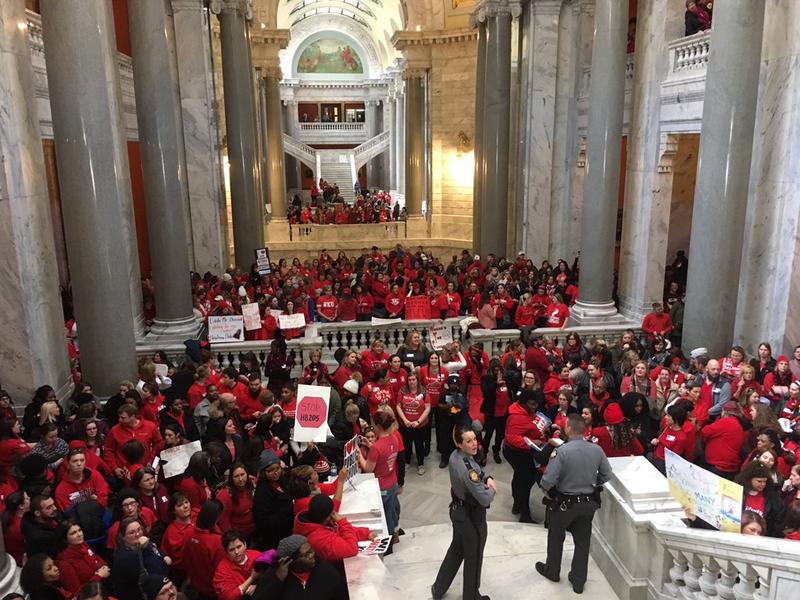 Leaders of the Kentucky House and Senate have begun meeting behind closed doors to hammer out a final version of a bill that re-opens the two-year tax bill that passed last year.

A “free conference committee” is created when the two legislative chambers disagree on a final version of a bill. The process gives lawmakers wide latitude to make other additions to legislation.

But opponents of a separate bill that would give tax credits to people who make donations that go to private school scholarships are worried that the larger bill will wind up including the credit language.

Senate President Robert Stivers, the Senate’s leader and one of the lawmakers in committee, declined to weigh in on what end up in the final version of the tax bill, saying that would be “pure speculation”

The legislature normally considers budget and tax bills in even-numbered years and doesn’t deal with them in odd-numbered years, when it requires more votes to pass such legislation.

The Senate passed its own version of the bill that would restore the state’s policy of taxing net gambling winnings instead of gross winnings.

The disagreement means that leaders of each chamber will hammer out their differences in the free conference committee.

With only five more working days in this year’s legislative session, the bill could become a vehicle for other proposals — a practice that has been used in previous years.

House Bill 205, the legislation dealing with scholarship credits, is one of a handful of education and pension-related bills that have triggered protests from teachers in recent weeks.

Gov. Matt Bevin has indicated he would sign the bill if it passed.

The next meeting of the free conference committee on House Bill 354 will be after the House and Senate adjourn on Thursday.

Superintendents from 17 Northern Kentucky school districts are speaking out in opposition to Kentucky House Bill 205, the "Scholarship Tax Credit" bill. The leaders say schools could lose millions of dollars if the bill is passed into law.

What Would It Take For Another Educator Sickout? Could Be Scholarship Tax Credits

The grassroots teacher advocacy group KY 120 United started this week by laying out a laundry list of educators' grievances in a web post that threatens more action to shut down schools if the Kentucky legislature crosses their "lines in the sand." Now many school superintendents and school board members are also voicing strong opposition to one of KY 120's chief complaints — a proposed bill for scholarship tax credits that public school advocates call a "backdoor school voucher" measure.

Future in Question for Confederate Marker at WKU

The Student Government Association at Western Kentucky University has voted in favor of relocating a historical marker on campus.

The marker identifies Bowling Green as the Confederate Capital of Kentucky during the Civil War.  The marker was erected in 1952 during the civil rights era and stands in front of the Kentucky Museum.  SGA member Symone Whalin is an African-American student from Hardin County.

“I just feel like people should understand there is a time and setting for history to be remembered and I don’t think that every time I walk to class, I should be reminded that people who looked like me were not allowed to be here," Whalin told WKU Public Radio.