Jefferson County Circuit Court Judge Mitch Perry issued the order after a hearing Wednesday. It blocks enforcement of the “trigger law” that went into effect June 24 after the U.S. Supreme Court ruled to overturn Roe v. Wade, as well as a separate six-week ban that was previously stopped in federal court.

Planned Parenthood and the ACLU are representing the state’s only two abortion clinics. They filed the lawsuit challenging Kentucky’s new restrictions on Monday, arguing abortion is allowed under the state’s constitution.

Kentuckians will vote on a measure this November that would exclude abortion rights from the state’s constitution.

Kentucky providers halted abortions Friday. It is not clear when they will resume.

Lawyers for the plaintiffs said “numerous” Kentuckians have had to unwillingly carry pregnancies or go to other states for abortion services since the ban went into effect. They responded to the ruling in an emailed statement.

“We’re glad the court recognized the devastation happening in Kentucky and decided to block the commonwealth’s cruel abortion bans,” they said. “Despite this victory, we know this fight is far from over — especially with politicians like Attorney General Daniel Cameron doing everything they can to score political points at the expense of Kentuckians’ wellbeing.”

In a statement, Cameron criticized Perry’s ruling, saying it was not based on the state’s constitution and that the U.S. Supreme Court gave states the power to regulate abortions in its decision last week.

“We cannot let the same mistake that happened in Roe v. Wade, nearly 50 years ago, to be made again in Kentucky. We will be seeking relief from this order,” he said.

The next hearing in the case will be on July 6. 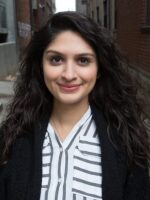 Amina Elahi
Amina Elahi is the City Editor at WFPL. Her coverage includes following the city's business and civic leaders and reporting on how their decisions affect local communities. A Chicago-area native, she is interested in issues of diversity and opportunity. Prior to joining WFPL, Elahi covered technology, innovation and business for the Chicago Tribune. She has a bachelor's degree from Northwestern University.
See stories by Amina Elahi
You might also like