Roads Will Feel the Impact of 500,000 Eclipse Chasers 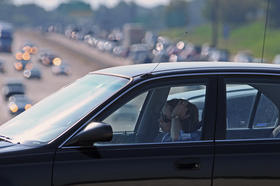 As someone who spent most of her career in international business, Joann Bundock has seen some amazing sights all over the world, but she’s headed home to her native Kentucky to see something else pretty spectacular-the first total solar eclipse to travel the width of North America in 99 years.

“My husband woke me up one morning and said ‘We’re going to Kentucky. There’s going to be a total eclipse of the sun and it’s going right over your family’s farm in Kentucky,'" Bundock told WKU Public Radio.  "This has been on his bucket list forever.”

The couple from Toronto, Canada will be among the sea of humanity rolling into western and southern Kentucky this weekend.  NASA estimates that as many as half-a-million people will converge on the region.

Once they get to Kentucky, the Bundocks are expecting bumper to bumper traffic.

“We anticipate lots of crowded roads, stated Joann Bundock.  "In fact, we’re going to get to where we’re viewing the eclipse on Sunday so that we don’t have to drive on Monday.”

The eclipse will stretch 93 miles across Kentucky.  Traffic is expected to be worst on Interstates 65, 24, and 69, as well as US 6880 and the Natcher and Pennyrile Parkways.

The Kentucky Department of Transportation is treating the eclipse like a snow and ice event.  Wes Watt is with the Cabinet’s district office in Bowling Green.

“There’s only so much we can do proactively, but we are pre-positioning our equipment and crews along the potential impacted roadways," explained Watt.

Standing alongside US 68-80, Watt encouraged eclipse chasers to leave early for their destinations.

“Even local people, don’t expect to wait 20 minutes beforehand and expect to get to Logan or Todd County, or Hopkinsville because the likelihood of you getting there is not very good," remarked Watt.

Watt says the congestion is unavoidable because rural areas, many of which offer the best eclipse viewing, don’t have the infrastructure in place to handle large crowds.

Transportation officials implore motorists to avoid stopping on roadways, rights-of-way, or shoulders to view the eclipse.

“Particularly interstates and parkways along with major routes like US 68-80, but also more rural routes where the road isn’t very wide, it’s extremely dangerous," commented Watt.  "We have to keep those open for broken down vehicles and emergency vehicles.”

As visitors from 38 states and 16 countries descend on Hopkinsville alone, Watt offers another tip for out of town motorists-don’t rely solely on GPS navigation.

“One thing a lot of people haven’t thought of is the strain on the communication system. Cell phone towers in these rural areas may be overwhelmed and data and phone calls may be interrupted," Watt explained. "We’re asking people to print off directions or bring hand-held maps just in case.”

Visitors are expected to trickle in over the weekend to camp out and attend festivals.  That should smooth out arrival traffic.  The bigger problem may be when the eclipse is over and many visitors head for home. The mass exodus is expected to produce traffic akin to the Kentucky Derby and Thunder Over Louisville.

Dozens of message boards will be stationed along major highways to share traffic information with motorists.  A helicopter will be monitoring keys highways and interchanges, and traffic updates will be posted on the Kentucky Transportation Cabinet's social media sites.

While transportation officials and first responders have their game plans in place, they’re asking eclipse chasers to do the same.  Three pieces of advice for your safety and sanity-come early, stay put, and leave late.