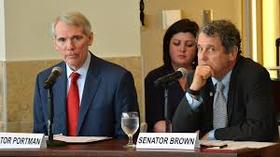 The potential 2020 presidential candidate told reporters during a Wednesday confernce call Ohioans do not belive building a wall is the best option to secure the border with Mexico.

Brown is encouraging Ohioans to put pressure on Republican U.S. Senate Majority Leader Mitch McConnell to break the impasse between Congress and the White House. Meanwhile, Republican U.S. Senator Rob Portman of Ohio is ugring President Trump not to declare a national emergency to fund construction of a wall on the Mexican border.  Porrtman spoke on the issue during a conference call on Tuesday.

The president suggested he could declare a national emergency after talks to end the partial government shutdown failed. Congressional Democrats are balking at Trump's call for funding for a wall. Portman says a negotiating point could be extending the DACA program.

The partial shutdown of the federal government has impacted U.S. Department of Agriculture offices in Kentucky.

One victim of the government shutdown is the USDA Rural Development program. Some of the services in that program include mortgage loans and grants to individuals in rural areas; investment in rural broadband and electric infrastructure; improved roads and ports; funding for water and wastewater treatment facilities.

Here’s part of the recorded message from a call today to the USDA Rural Development Kentucky State office:

“We are on furlough due to the lapse in federal government funding. Please leave a voicemail or email. Please note that we do not have access to email or voicemail due to the current lapse in funding. We look forward to returning your message once funding has been restored.”

Some federal employees are worried they may not get paid this week because of the partial government shutdown. Cincinnati Public Schools says the children of those families may qualify for free meals through the National School Lunch Program.

How The Government Shutdown Is Affecting Our Area