The parents of Bailey Holt and Preston Cope, two 15-year-olds killed in the Marshall County High School shooting in January, testified to a group of lawmakers Monday, urging them to make schools safer before students return to the classroom this fall.

Marshall County Schools Superintendent Trent Lovett struggled to find words to begin remarks, “My seat at this table is much easier than their seat I can promise you,” he said.

“January 23 was a very trying day for all of us. I’ve been in education 30 years and never expected to see what I saw that day. It was one of our students, it wasn’t like we had an outsider come in [...] so it’s been a tough few months,” Lovett said.

School was cancelled the two days following the incident and other reparations have been made to secure the classrooms and create a safer environment following the students return.

Lovett said he asked students what they would need to feel safe. He said checking backpacks was their first request, followed by more stringent checks using metal detector wands.

The school district plans to place walk-through metal detectors at both the high school and middle school and implement a no backpack policy with the exception of elementary schools, which allow clear bags. Lovett said the district also recently began interviewing for additional resource officers.

Backpack ProblemsKentucky State Police Deputy Commissioner Alex Payne said the Marshall shooting is the fourth in the state where a backpack has been used to conceal weapons.

December 2017 marked the 20 year anniversary for the Heath High School Shooting, where 14-year-old Michael Carneal opened fire on his classmates.

“Michael Carneal, sneaks a shotgun and rifle in a blanket he had rolled up as a school project, then he also had a 22 semi-automatic - guess where, in a backpack! He brings it in, there is a prayer group out front, pulls it out, empties the gun into the prayer group. Three of those young ladies died in a hospital,” Payne described.

“And now we have Marshall,” he said. “There are 630 souls in front of him when he pulls the gun out of the backpack in less than five seconds,” Payne said he knows this because he saw it in a video. He advised the committee that the video is not something that should be viewed. “And in less than five seconds he empties a magazine into that mass of humanity. And God love em',” Payne slams his fist on the table and looks to the victims families.

“We've had four lessons, four. We can't do this again.”

The parents along with members of the committee discussed a decayed sense of responsibility in parenting - from not locking away weapons to a complete disregard for the well-being of a child in not shielding kids from graphic music, games and content that they said is desentizing communities from violent behavior.

“We can change the culture I agree it's horrible. The thing is, the fact is we are generations deep into people like this, so even if we could change the culture today, which we can't. It all comes down to what you said, how do we make these schools safer?” Payne said first the group should figure out how to not let kids sneak guns into backpacks in schools.

“You all were hurting with us,” Holt said. Payne also delivered Bailey’s backpack to the family after the shooting.

“That was a hard day, too. Getting those contents of her backpack and seeing all of her A's in her homework,” Holt said. “And then the police pulled her glasses out of his pocket and gave those to me. Her glasses didn't have a scratch on them. They're still perfect and that's all we have.”

Preston’s father, Brian Cope said he knows raising taxes isn’t a popular idea but said if it has to be done to find the funding to make schools safe then legislators should move in that direction. He asked, if government buildings can be protected, why can’t schools?

“What is a child's life worth? What's the price tag?” Cope said  he would give everything to have Preston back. “We can't look at the dollar signs of it. We have to look at raising whatever we have to [...] Because you can't put a price on a kids life.”

The bipartisan 2018 School Safety Working Group formed in May after the MCHS shooting and others around the country. The meeting at Trigg County High School is the group's third attempt to gather information on how best to legislate school safety.

Prior to hearing from the families the Interim Joint Committee on Education heard from a group of Trigg County High School students who also dealt with a recent tragedy - a school suicide. 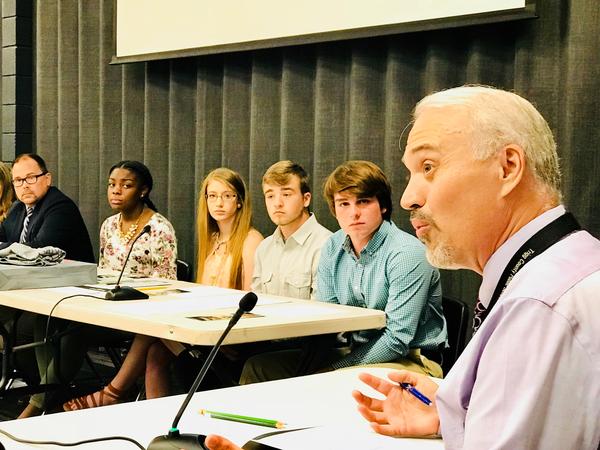 16-year-old student Hope Howard told the IJCE that school is tough. She, along with three other teens shared stories of success found in a new program implemented in 45 schools across the commonwealth. ‘Sources of Strength’, described as more of a movement than a program, offers ‘hope, help and strength’ for students struggling with mental health.

Each student focused on a source of strength highlighted through a diagram: mental health, family support, positive friends, mentors, healthy activities, generosity, spirituality and medical access.  Howard said that access to sources like family support and medical access have been critical to her ability to move forward at school.

“For me, last year was really hard. I suffer from migraines and they were getting really hard. Without this medicine it’s really rough,” she said. “And there are some kids that might not have access.”

Trigg County implemented the program in March after the school lost a student to suicide.

Democratic state Senator Reggie Thomas asked if the students had considered gun violence as a topic of interest. He reflected on the unifying activities the students at Parkland had organized as a means of student body support.

The Trigg County students said they believe healthier environments can be stronger than gun laws because it’s the negative surroundings that influence violent behavior.

Student Garrett Knight, 17, said he believed the impetus for a student bringing a gun to school isn’t something that happens overnight. “It happens over years and years and if we can focus more on positivity instead of negativity we can prevent that kind of behavior,” he said.

Other programs mentioned to the education committee included Handle With Care, a crisis intervention and behavior management training service.

“Studies show that six out of 30 kids in a classroom will have a diagnosable disorder, ” said Vestena Robbins, executive advisor to the Kentucky Department for Behavioral Health.

She also said  that five percent of students have mental health issues enough to impede their ability to function at home, in the classroom and community; and that Kentucky students face significant adversity with 27% percent having two or more adverse childhood experiences

Robbins said the state has a strong need to focus on preventive care to ensure the psychological safety for its students.

That can be difficult with a shortage of mental health professionals across the Commonwealth. She said it makes it more important to create school environments that empower students to feel they can share struggles internally and those they perceive among their peers.

The committee discussed annual mental health screenings to partner with typical physical assessments to help identify issues before they can lead to violent behavior.

The committee plans to meet again August 13 in Frankfort with the intent to hear from a panel of students.

Gov. Matt Bevin says in order to put an end to school shootings, parents need to stop over-medicating their children and steer them away from cell phones and violent video games.

The Ohio legislature's standoff over "Stand Your Ground" has been pushed back to the fall.